How DNA Base Pairs Escape From the Excited-State: Antiaromaticity Relief in the Picoseconds

Before the development of an ozone layer in the Archean atmosphere, the flux of UV radiation reaching Earth was suggested to be several orders of magnitude higher than it is today. For the emerging biomolecules, constant exposure to strong UV irradiation meant that useful molecules had to be resistant to UV damage and harmful photochemical reactions. From this prebiotic environment, the Watson–Crick structures of A·T and G·C base pairs survived to encode genetic information—and the photostability of these winning pairs in this specific arrangement is astonishing. Upon UV irradiation, the photoexcited canonical base pairs undergo proton-coupled electron transfer (PCET), followed by non-radiative decay, and convert internally to the electronic ground state within picoseconds. But the underlying reason why this process happens so efficiently has not been explained. Here we show that efficient photodeactivation in isolated base pairs are driven by antiaromaticity relief during PCET. According to computed nucleus independent chemical shifts, the A·T and G·C base pairs are aromatic in the electronic ground state, but the purines become highly antiaromatic in the first 1ππ* state, and PCET relieves this excited-state antiaromaticity. We found especially pronounced antiaromaticity relief for the major PCET pathway of isolated Watson–Crick A·T and G·C base pairs, when compared to alternative proton transfer routes or to PCET reactions in non-canonical pairs. Our findings suggest that excited-state deactivation of isolated base pairs are tied to sudden changes in aromaticity and antiaromaticity within the picoseconds that follow a strike of UV-light. 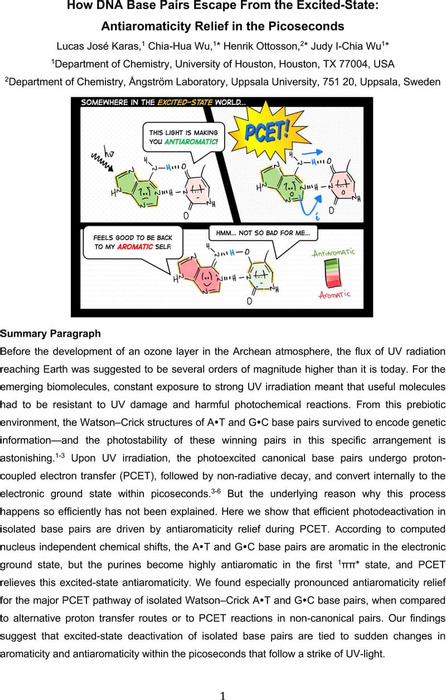 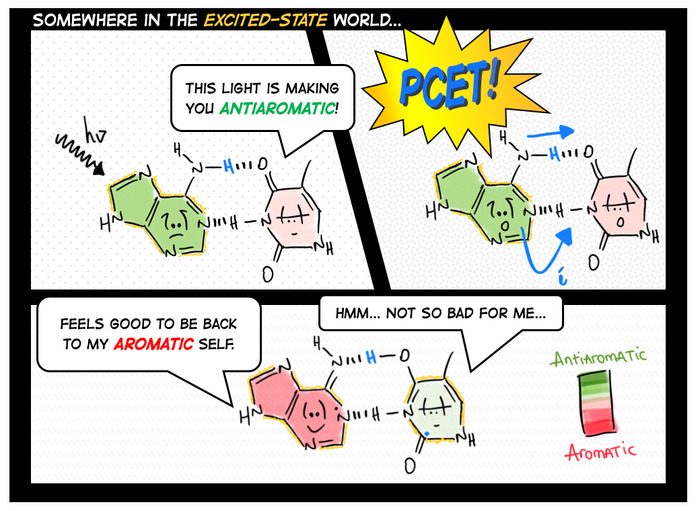 We are encoding your file so that it is compatible across browsers, depending on file size and type this may take some time.
TOC-PCET