Global Aromaticity at the Nanoscale

Aromaticity is an important concept for predicting electronic delocalisation in molecules, particularly for designing organic semiconductors and single-molecule electronic devices. It is most simply defined by the ability of a cyclic molecule to sustain a ring current when placed in a magnetic field. Hückel’s rule states that if a ring has [4n+2] π-electrons, it will be aromatic with an induced magnetisation that opposes the external field inside the ring, whereas if it has 4n π-electrons, it will be antiaromatic with the opposite magnetisation. This rule reliably predicts the behaviour of small molecules, typically with circuits of less than about 22 π-electrons (n = 5). It is not clear whether aromaticity has a size limit and whether Hückel’s rule is valid in much larger macrocycles. Here, we present evidence for global aromaticity in a wide variety of porphyrin nanorings, with circuits of up to 162 π-electrons (n = 40; diameter 5 nm). We show that aromaticity can be controlled by changing the molecular structure, oxidation state and three-dimensional conformation. Whenever a global ring current is observed, its direction is correctly predicted by Hückel’s rule. The magnitude of the current is maximised when the average oxidation state of the porphyrin units is around 0.5–0.7, when the system starts to resemble a conductor with a partially filled valence band. Our results show that aromaticity can arise in large macrocycles, bridging the size gap between ring currents in molecular and mesoscopic rings. 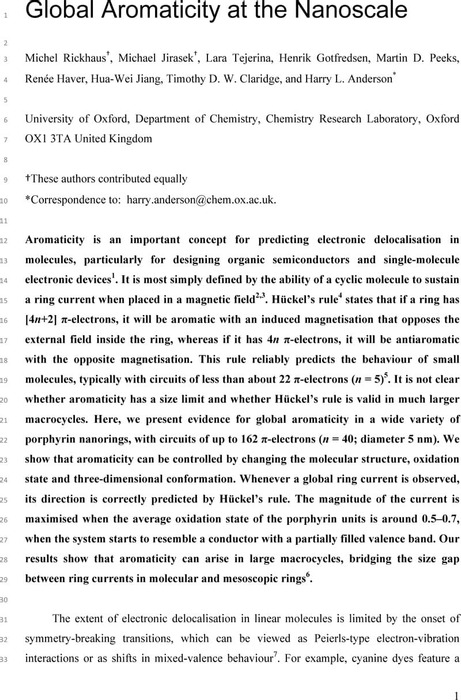 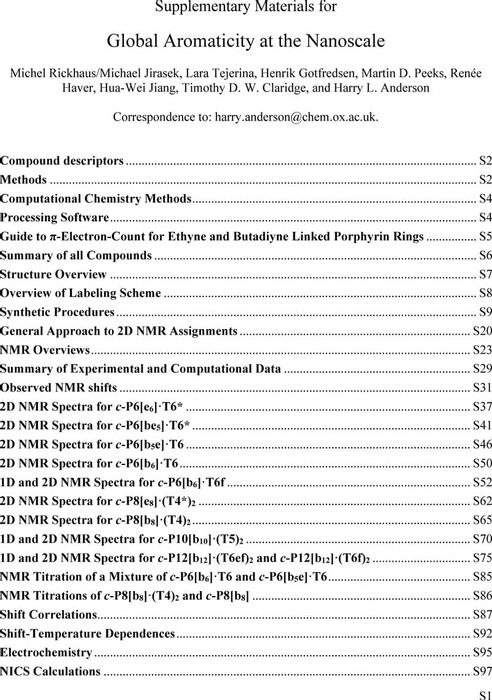 We are encoding your file so that it is compatible across browsers, depending on file size and type this may take some time.
SI Global 21June19

We are encoding your file so that it is compatible across browsers, depending on file size and type this may take some time.
global aromaticity

We are encoding your file so that it is compatible across browsers, depending on file size and type this may take some time.
xyz coordinates