Using ultrafast two-dimensional infrared spectroscopy (2D-IR), a vibrational probe (thiocyanate, SCN-) was used to investigate the hydrogen bonding network of a molten salt (ethyl-ammonium nitrate, EAN) compared to that of H2O. The 2D-IR experiments were performed in both parallel () and perpendicular () conditions along with temperature dependence for both EAN (14-130 ˚C) and H2O (5-89 ˚C). With polarization control, the frequency fluctuation correlation function can be separated into structural and rotational components. An Arrhenius analysis lead to independent activation energies for the isotropic, and anisotropic signals, structural spectral diffusion, and rotational induced spectral diffusion. The rotational Eas were similar for both EAN and H2O suggesting that SCN- is experiencing a similar jump model, i.e. where hydrogen bond reorientation is dominated by large angular jumps stemming from molecular rotation dynamics. The frequency pre-factors, however, were different where the more rigid and vicious EAN had a slower rate. Furthermore, the 2D-IR anisotropy and vibrational relaxation rates of EAN are frequency dependent, revealing that SCN- experiences two subensembles. We suggest that the sub-ensemble with a faster rotational timescale correlates to SCN- with more, weaker hydrogen bonds, and the sub-ensemble with a slower rotational timescale correlates to SCN- with a stronger, more directional hydrogen bond. 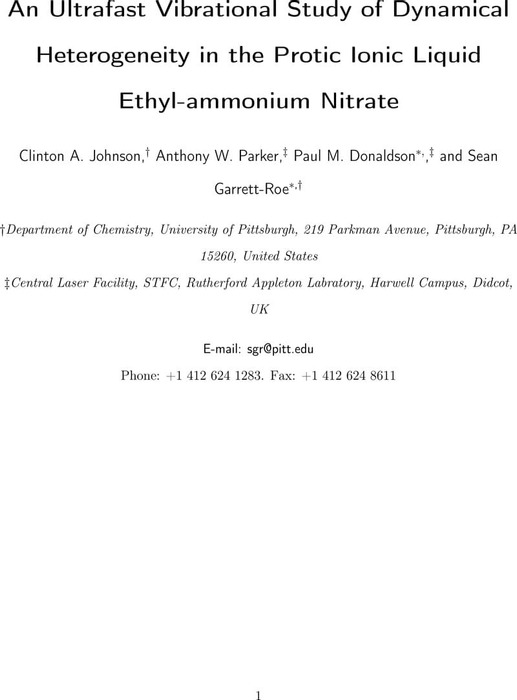