Mercury Sorbents Made by Inverse Vulcanization of Sustainable Triglycerides: The Plant Oil Structure Influences the Rate of Mercury Removal from Water

High sulfur content polymers were prepared through the copolymerization of sustainable triglycerides and sulfur. The products of the so-called “inverse vulcanization” contain 50% sulfur by mass and were evaluated in the removal of inorganic and alkylmercury compounds from water. The structurally distinct triglycerides found in canola oil, castor oil, and rice bran oil were all examined as co-monomers in the inverse vulcanization reaction to determine how each influences the rate and capacity of mercury uptake. It was found that the high percentage of hydroxylated ricinoleic acid in castor oil improves both wetting and the rate of uptake of mercury(II) chloride into the polymer, in comparison to the polymers made from canola oil and rice bran oil. For the castor oil, the initial rate of uptake of mercury(II) chloride was more than three times the initial rate of uptake of the canola oil polymer, with a mercury removal efficiency exceeding 99.99%. The affinity of the castor oil polymer for HgCl2 was also excellent, with a distribution coefficient (Kd) on the order of 106 mL/g. In contrast, the polymer made from the inverse vulcanization of canola oil and sulfur had an initial rate of uptake more the twice the rate of the castor oil copolymer in experiments involving sorption of the mercury-based fungicide 2-methoxyethylmercury chloride (MEMC). In addition to kinetics, sorption isotherms were obtained for all polymer sorbents and fit to both Langmuir and Freundlich isotherm models. In terms of sustainability, this work advances the use renewable monomers such as triglycerides sourced from plants and inexpensive industrial byproducts such as sulfur to make affordable mercury-binding materials. 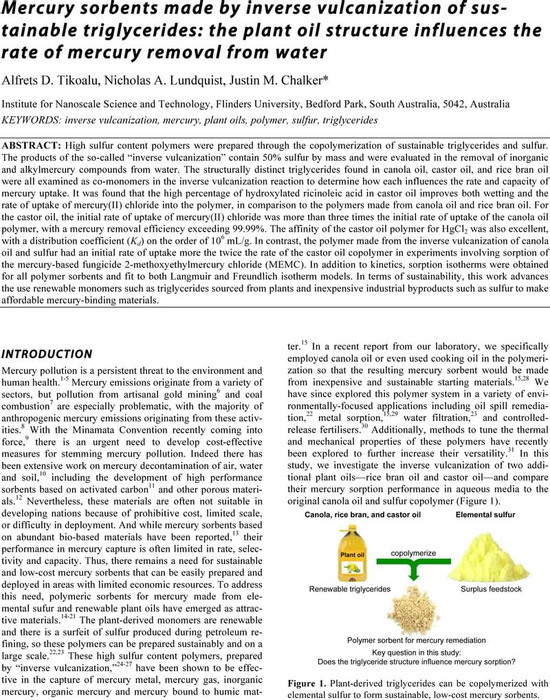 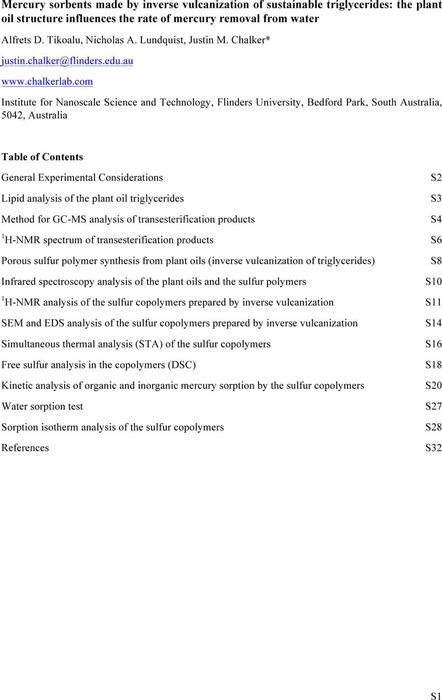 J.M.C. is an inventor on a patent covering synthesis and applications of polymers made from sulfur and plant oils, including the polymers described in this study. This patent is assigned to Clean Earth Technologies.