Avoided crossings can trigger abrupt changes of electronic character and redirect the outcomes of photochemical reactions. Here, we report a theoretical investigation into core-level spectroscopic probing of predissociation dynamics of sodium iodide (NaI), a prototype system for studies of avoided-crossing dynamics. The elegant femtochemistry work of Zewail and co-workers pioneered the real-time dynamics of NaI, detecting the Na atoms bursting forth from the avoided crossing and the residual NaI molecules oscillating inside the quasi-bound potential. The simulated results show that core-level spectroscopy not only observes these integrated outcomes, but also provides a direct measure of the abrupt switching of electronic character at the avoided crossing. The valence and core-excited electronic structures of NaI are computed by spin-orbit general multi-congurational quasi-degenerate perturbation theory, from which core-level absorption spectra of the predissociation dynamics are constructed. The wave-packet motion on the covalent potential is continuously mapped as shifts in the absorption energies, and the switching between the covalent and ionic character at the avoided crossing is characterized as the sharp rise and fall of the Na+ signal. The Na+ signal is found to be insensitive to the wave-packet motion in the asymptotic part of the ionic potential, which in turn enables a direct measure of the nonadiabatic crossing probability excluding the eect of wave-packet broadening. 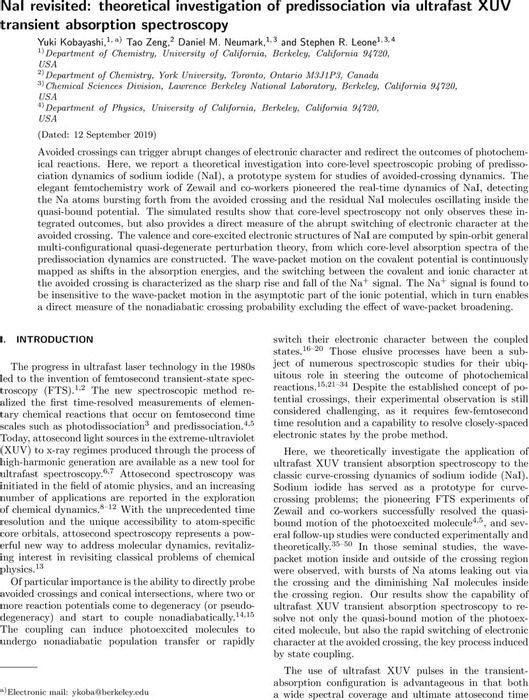 We declare no conflict of interest