Higher-order structure in abiotic foldamer systems represents an important but largely unrealized goal. As one approach to this challenge, covalent assembly can be used to assemble macrocycles with foldamer subunits in well-defined spatial relationships. Such systems have previously been shown to exhibit self-sorting, new folding motifs, and dynamic stereoisomerism, yet there remain important questions about the interplay between folding and macrocyclization and the effect of structural confinement on folding behavior. Here, we explore the dynamic covalent assembly of extended ortho-phenylenes (hexamer and decamer) with rod-shaped linkers. Characteristic 1H chemical shift differences between cyclic and acyclic systems can be compared with computational conformer libraries to determine the folding states of the macrocycles. We show that the bite angle provides a measure of the fit of an o-phenylene conformer within a shape-persistent macrocycle, affecting both assembly and ultimate folding behavior. For the o-phenylene hexamer, the bite angle and conformer stability work synergistically to direct assembly toward triangular [3+3] macrocycles of well-folded oligomers. For the decamer, the energetic accessibility of conformers with small bite angles allows [2+2] macrocycles to be formed as the predominant species. In these systems, the o-phenylenes are forced into unusual folding states, preferentially adopting a backbone geometry with distinct helical blocks of opposite handedness. The results show that simple geometric restrictions can be used to direct foldamers toward increasingly complex geometries. 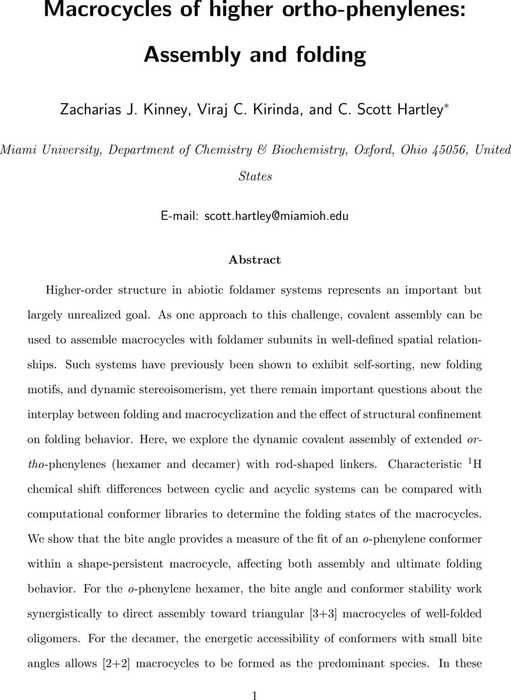 We are encoding your file so that it is compatible across browsers, depending on file size and type this may take some time.
Macrocycles of higher o-phenylenes - SI - geos 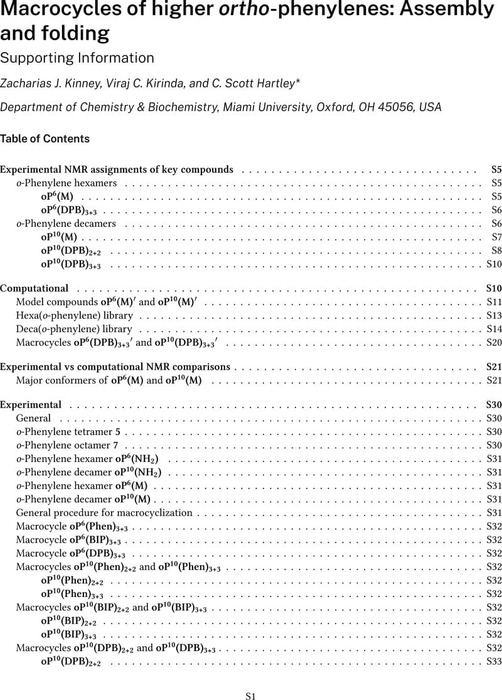 We are encoding your file so that it is compatible across browsers, depending on file size and type this may take some time.
Macrocycles of higher o-phenylenes - SI