Introducing additional meso- or macroporosity into traditionally microporous metal-organic frameworks (MOFs) is a very promising way to improve the catalytic performance of these materials, mostly due to the resultant reductions of diffusional barriers during liquid-phase or gas-phase reactions. Here we show that HKUST-1 can be successfully synthesised either via post-synthetic treatment (etching prepared HKUST-1 samples in phosphoric acid, here called HKUST AE) or via in situ crystallisation (exposing the MOF precursor solution to supercritical CO2, here called HKUST CO2) to produce hierarchically porous structures that are highly beneficial for catalysis. These hierarchical MOFs were characterised by powder X-ray diffraction (PXRD), scanning electron microscopy (SEM) and gas sorption to confirm the preservation of the microscopic structure and the appearance of macropores in the crystallites. More importantly, the benefits of introducing these hierarchical porous structures into this MOF for improving the diffusion accessibility of reagents to the sample in catalysed liquid- and gas-phase reactions were quantified for the first time. It was found that the hierarchical pore structure helped to increase the reaction conversion of styrene oxide methanolysis (by ~65 % using either HKUST AE and HKUST CO2, at 40 oC in 25 min) and CO oxidation (by 55 % using HKUST CO2 at 260 oC). These findings demonstrate the advantage of using hierarchical porous MOFs in catalysis. 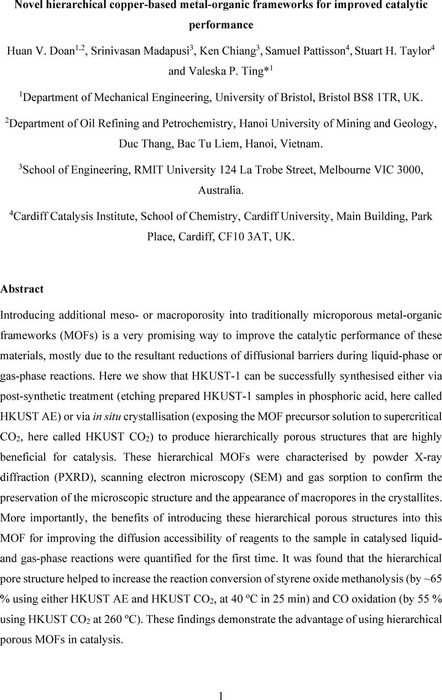 download asset HKUST for catalysis - HD.pdf 2 MB [opens in a new tab] cloud_download
pdf : 2 MB
We are encoding your file so that it is compatible across browsers, depending on file size and type this may take some time.

The authors declare no competing interest