Direct Ortho-Metallation of Aryl Substituted Heteroaromatic Ligands with TiCl 4 and ZrCl 4 - An Experimental and DFT Study with 2-Phenyl Indole as the Ligand.

TiCl 4 and ZrCl 4 each react with aryl substituted heteroaromatic ligands such as 2-Phenyl-1H-indole, to thermally undergo one-pot direct orthometallations, and yield new types of cyclometallated complexes. TiCl 4 coordinates at ambient temperature to form the indole complex ( 1 ), which undergoes isomerization to the indolenine ( 2 ). DFT calculations indicate that complex ( 2 ) is more stable than ( 1 ) by 6.4 kcal/mol. Upon warming to about 105°C, extrusion of HCl takes place with simultaneous orthometallation ( 3 ), yielding a metallacyclic complex ( 4 ). The mechanism of the orthometallation has been investigated by DFT, and the transition state c onfir med by IRC. At the elevated temperature the transition state ( 3 ) involves the synchronous transformation of four atoms, Ti, ortho C, H, and the apical Cl. The ortho C of the phenyl group acquires a partial positive charge through conjugation, forming a (C-H)δ + ...Clδ - interaction, with a simultaneous elongation and breaking of the Ti-Cl bond, resulting in the formation of a Ti-C bond. The latter bond is created at the same time a Ti-Cl bond is breaking, and an HCl is being formed, as illustrated in transition state ( 3 ). This HCl is retained in the crystal structure of the final product ( 4 ), by electrostatic interaction with one of the chloride ligands. The reaction sequence may be repeated with ZrCl 4 in place of TiCl 4 . Complex ( 4 ) has been isolated and characterized by solid state 13 C NMR CPMAS/DDMAS spectra, X-ray photoelectron spectroscopy (XPS), infrared and analytical data. The intermediate structures ( 1 through 4 ), as well as the sequence of ligand transformations to produce the ortho-metallated complex are supported by DFT calculations. The new cyclometallated complexes are thermally stable, unlike several other complexes featuring a Ti-C bond. They may have important applications, such as in α-olefin polymerization catalysis, and as building blocks in metalodrugs for cancer therapy. 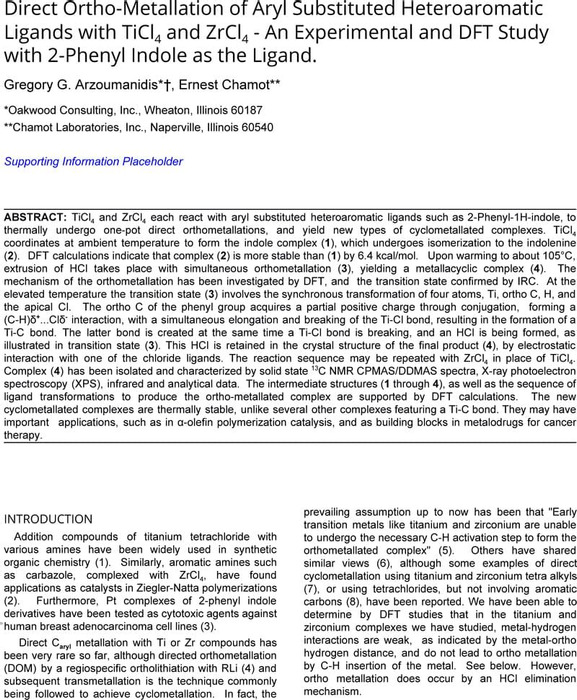 download asset RevisionPhind (2).pdf 1 MB [opens in a new tab] cloud_download
pdf : 1 MB
We are encoding your file so that it is compatible across browsers, depending on file size and type this may take some time.

There is no conflict of interest.