Surface chemistry is one of the most crucial aspects for microarray modality biosensor development. As a matter of fact, the immobilization capability of the functionalized surface is one of the limiting factors for the final yield of the binding reaction. In this work, we locally deposited many reactive polymers on a single solid support, allowing for a direct comparison of functionality of probes immobilized on different polymers and demonstrating a new way of multiplexing. Our goal was to investigate the immobilization efficiency of reactive polymers, as well as the resulting affinity of the molecular probes, in a single experiment. This idea was demonstrated by spotting a large number of different reactive polymers on an untreated Si/SiO2 chip, and depositing the same molecular probe on all the spots immediately after. This method proved to be efficient and could be used as an initial qualitative assay to decide which functionalization better suits a certain application. We also showed that the localized functionalization method is applicable to proteins as well as oligonucleotides. Moreover, by means of real-time binding measurements performed with the Interferometric Reflectance Imaging Sensor (IRIS), we demonstrated that this functionalization technique is comparable to the uniformity of classical flat-coating solution. The comparison between the binding curves that were obtained from different polymer spots with the same probe allowed us to decide which polymers would work better to immobilize a model protein, α-Lactalbumin, as well as a peptide extracted from the latter, namely LAC-1. The final outcome is promising, and it highlights the multiplexing power of this method: first, it allows to characterize dozens of polymers at once, within a single 60-minutes experiment. Secondly, it removes the limitation, related to coated surfaces, that only molecules with the same functional groups can be tethered to the same solid support. By applying this innovative protocol, there is no more restriction on the type of molecules that can be studied simultaneously and immobilization for each molecular probe can be individually optimized. 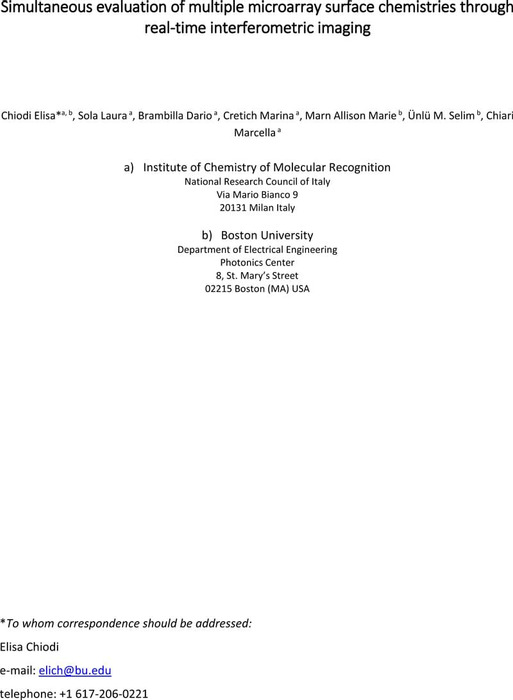 We are encoding your file so that it is compatible across browsers, depending on file size and type this may take some time.
SPOTTEDPOLYMERS BiosensorsBioel-DEF ammedits

We are encoding your file so that it is compatible across browsers, depending on file size and type this may take some time.
SUPPLEMENTARYMATERIAL SpPol