Direct synthetic routes to amidines are desired, as they are widely present in many biologically active compounds and organometallic complexes. N-Acyl amidines in particular can be used as a starting material for the synthesis of heterocycles and have several other applications. Here, we describe a fast and practical copper catalyzed 3-component reaction of aryl acetylenes, amines and easily accessible 1,4,2-dioxazol-5-ones to N-acyl amidines, generating CO2 as the only by-product. Transformation of the dioxazolones on the Cu-catalyst generates acyl nitrenes that rapidly insert into the copper acetylide Cu-C bond rather than undergoing an undesired Curtius rearrangement. For non-aromatic dioxazolones, [Cu(OAc)(Xantphos)] is a superior catalyst for this transformation, leading to full substrate conversion within 10 minutes. For the direct synthesis of N-benzoyl amidine derivatives from aromatic dioxazolones, [Cu(OAc)(Xantphos)] proved to be inactive, but moderate to good yields were obtained when using simple CuI as the catalyst. Mechanistic studies revealed the aerobic instability of one of the intermediates at low catalyst loadings, but the reaction could still be performed in air for most substrates when using catalyst loadings of 5 mol%. The herein reported procedure does not only provide a new, practical and direct route to N-acyl amidines, but also represents a new type of
C-N bond formation. 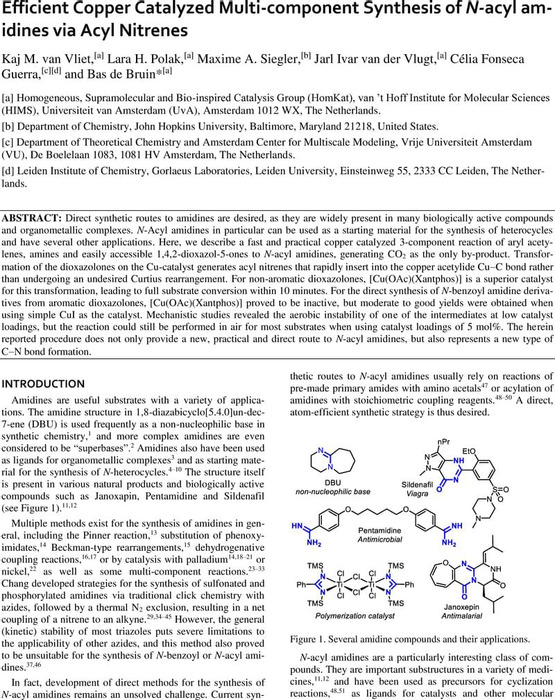 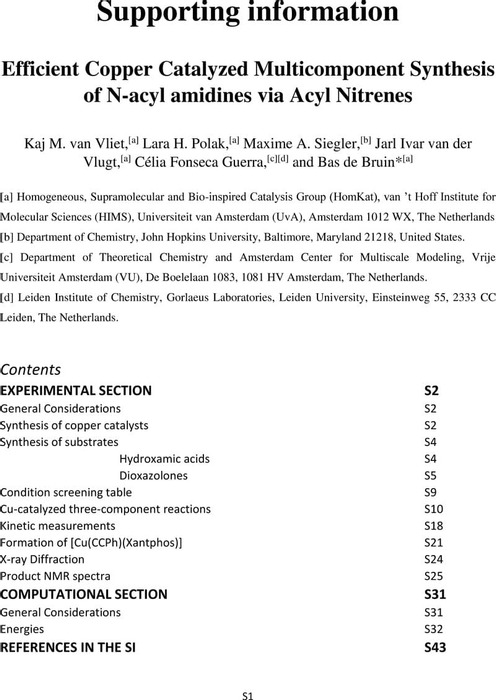 We are encoding your file so that it is compatible across browsers, depending on file size and type this may take some time.
KMvVliet ChemRXiv SupportingInfo B

No conflicts of interest