Life’s catabolic processes capture chemical energy from the oxidative breakdown of metabolites. In the catabolic pathways at the core of biochemistry, the oxidation of α-ketoacids or aldehydes is coupled to the synthesis of thioesters, whose energy-releasing hydrolysis is in turn coupled to the production of adenosine 5’-triphosphate (ATP). How these processes became linked before life emerged, and thus how the framework for modern bioenergetics was established, is a major problem for understanding the origins of biochemistry. The structure of biochemical networks suggests that the intermediary role of thioesters in biological energy flows, and their central role in biosynthesis, is a consequence of their entry into metabolism at the earliest stage of biochemical evolution. However, how thioesters could have become embedded within a metabolic network before the advent of enzymes remains unclear. Here we demonstrate non-enzymatic oxidant- or light-driven thioester synthesis from biological α-ketoacids and show it can be integrated within an iron-promoted metabolism-like reaction network. The thioesters obtained are those predicted to be pivotal in computational reconstructions of primitive biochemical networks (acetyl, malonyl, malyl and succinyl thioesters), demonstrating a rare convergence between top-down and bottom-up approaches to the origins of metabolism. The diversity and simplicity of conditions that form thioesters from core metabolites suggests the energetic link between thioester synthesis and catabolism was in place at the earliest stage of prebiotic chemistry, constraining the path for the later evolution of life’s phosphorus-based energy currencies. 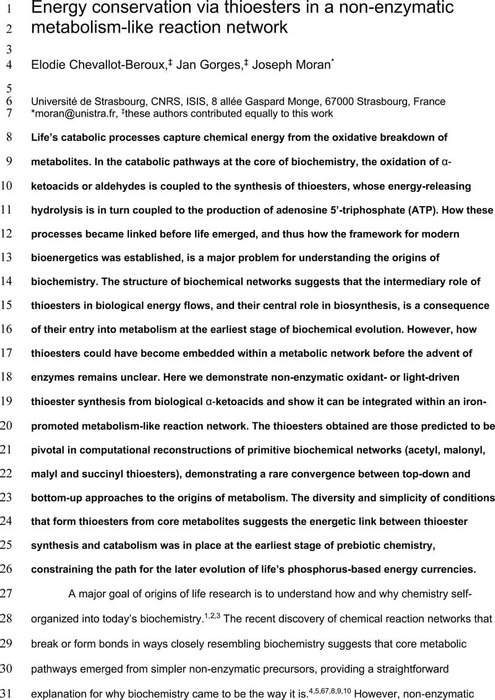 download asset thioesters v14.pdf 0.21 MB [opens in a new tab] cloud_download
pdf : 0.21 MB
We are encoding your file so that it is compatible across browsers, depending on file size and type this may take some time. 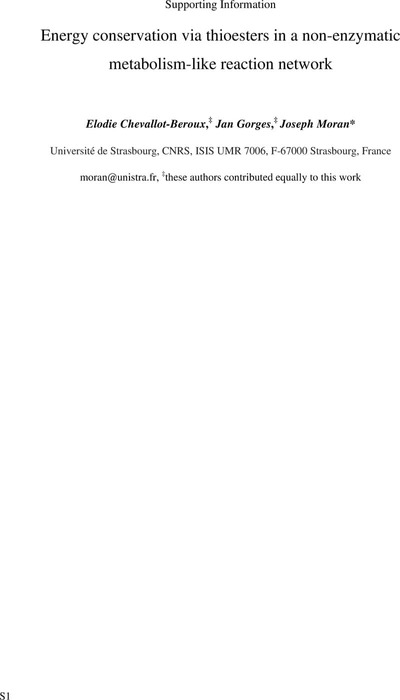