Despite its importance in biological processes and its influence on metal bioavailability, the biogeochemical cycle of dissolved organic sulfur (DOS) in aquatic systems is still poorly understood. Recent high-resolution mass spectrometry (HRMS) studies showed a selective loss of organic sulfur during photodegradation of dissolved organic matter (DOM), which was hypothesized to result in the production of sulfate. Here, we provide evidence of ubiquitous production of sulfate, methanesulfonic acid (MSA) and methanesulfinic acid (MSIA) during photodegradation of DOM samples from a wide range of natural terrestrial environments. We show that photochemical production of sulfate is generally at least one order of magnitude more efficient than the production of MSA and MSIA, as well as volatile S-containing compounds (i.e., CS2and COS). We also identify possible molecular precursors for sulfate and MSA, and we demonstrate that a wide range of relevant classes of DOS compounds (in terms of S oxidation state and molecular structure) can liberate sulfate upon photosensitized degradation. This work indicates that photochemistry plays a more significant role in the aquatic and atmospheric cycle of DOS than currently believed. 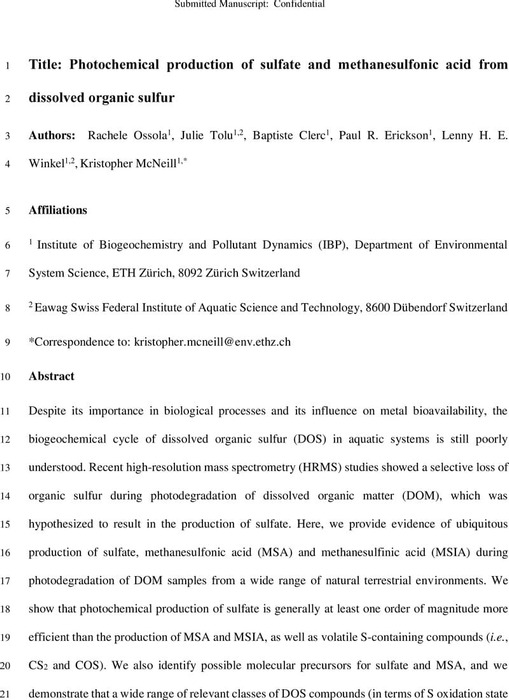 download asset RacheleOssola_ChemRxiv version2_manuscript.pdf 0.76 MB [opens in a new tab] cloud_download
pdf : 0.76 MB
We are encoding your file so that it is compatible across browsers, depending on file size and type this may take some time. 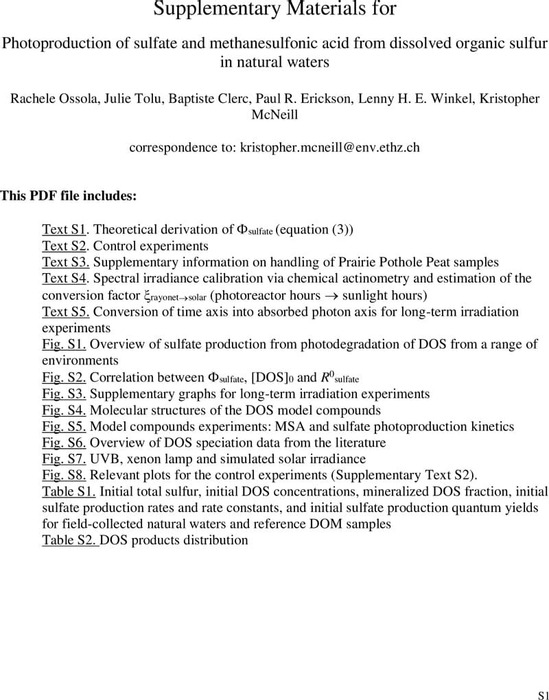 No conflict of interest to declare