In the framework of the 2018 Drug Design Data Resource (D3R) grand challenge 4, blinded predictions on relative binding free energy were performed for a set of 39 ligands of the Cathepsin S. We leveraged the GPU-accelerated thermodynamic integration (GTI) of Amber 18 to advance our computational prediction. When our entry was compared to experimental results, good correlation was observed (Kendall’s τ: 0.62, Spearman’s ρ: 0.80 and Pearson’s R: 0.82), with the highest correlation to experiment among all submissions. We designing a parallelized transformation map that placed ligands into several groups based on common alchemical substructures; TI transformations were carried out for each ligand to the relevant substructure, and between substructures. Our calculations were all conducted using the linear potential scaling scheme in Amber TI because we believe the softcore potential/dual topology approach implemented in current Amber TI is highly fault-prone. The issue was illustrated by using two examples in which typical preparation for the dual topology approach of Amber TI fails. Overall, the high accuracy of our prediction is a result of recent advances in force fields (ff14SB and GAFF), as well as rapid calculation of ensemble averages enabled by the GPU implementation of Amber. The success in a blinded prediction strongly suggests that alchemical free energy calculation in Amber is a promising tool for future commercial drug design. 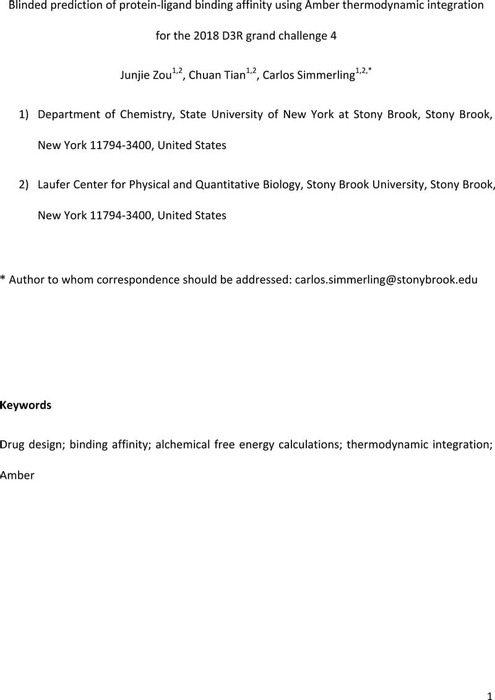 We are encoding your file so that it is compatible across browsers, depending on file size and type this may take some time.
Simmerling D3R 6-23-2019 SI