Homogeneous two-dimensional (2D) polymerization is a poorly understood process in which topologically planar monomers react to form planar macromolecules, often termed 2D covalent organic frameworks (COFs). While these COFs have traditionally been limited to weakly crystalline aggregated powders, they were recently grown as micron-sized single crystals by temporally resolving the growth and nucleation processes. Here, we present a quantitative analysis of the nucleation and growth rates of 2D COFs via kinetic Monte Carlo (KMC) simulations, which show that nucleation and growth have second-order and first-order dependences on monomer concentration, respectively. The computational results were confirmed experimentally by systematic measurements of COF nucleation and growth rates performed via in situ X-ray scattering, which validated the respective monomer concentration dependences of the nucleation and elongation processes. A major consequence is that there exists a threshold monomer concentration below which growth dominates over nucleation. Our computational and experimental findings rationalize recent empirical observations that, in the formation of 2D COF single crystals, growth dominates over nucleation when monomers are added slowly, so as to limit their steady-state concentration. This mechanistic understanding of the nucleation and growth processes will inform the rational control of polymerization in two dimensions and ultimately enable access to high-quality samples of designed two-dimensional polymers. 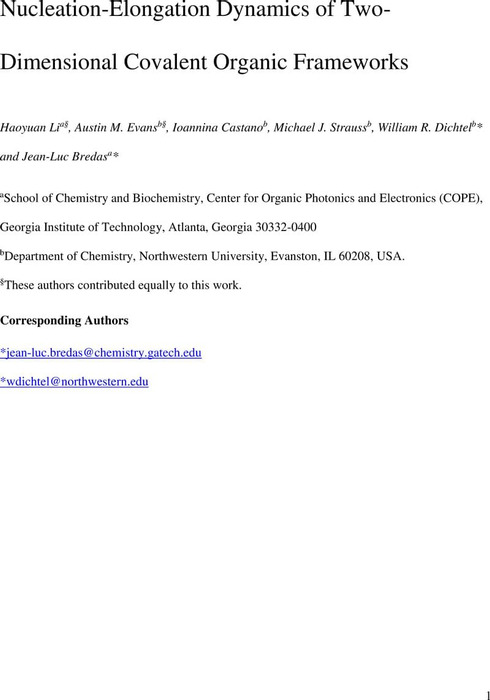 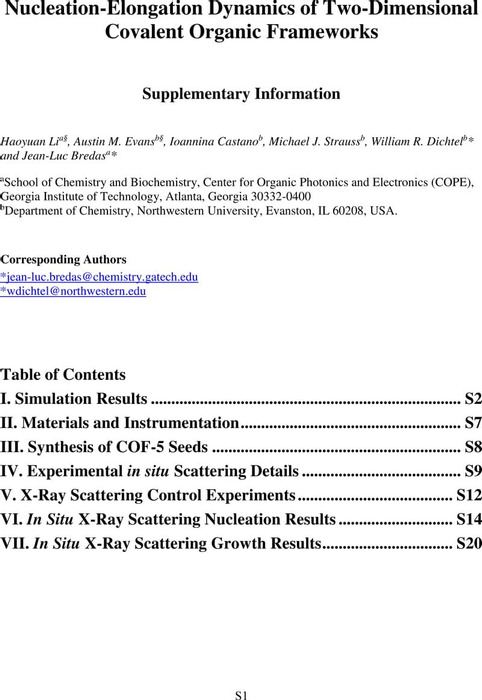 We are encoding your file so that it is compatible across browsers, depending on file size and type this may take some time.
COFNucleationGrowth-SI-062119 ChemRxiv

No conflict of interest to report.