Poly(butylene succinate) (PBS) is a thermoplastic and biodegradable polyester characterized by high rigidity due to its high crystallinity. However, the use of long chain biobased monomers to produce segmented copolymers is an effective strategy to tailor the properties of PBS, such as greater flexibility. In this paper, a series of aliphatic bio-copolyesters of poly(butylene succinate-dilinoleic succinate) (PBS-DLS) were successfully synthesized via a direct two-step polycondensation method using a semi-pilot scale reactor for melt polymerization and titanium dioxide/silicon dioxide coprecipitate catalyst (C-94). In this study, the thermal and mechanical properties were investigated and compared, focusing on the effect of varying the amount of biobased dilinoleic diol in the structure. With increasing amount of long chain diol, a decrease in molecular weight, density, and melt flow index was observed. The semicrystalline nature of the copolymers was confirmed using differential scanning calorimetry (DSC) and dynamic mechanical thermal analysis (DMTA) methods. These copolymers exhibit two main transition temperatures and vary in softness and processing flexibility. Furthermore, in the DSC data a linear trend was observed with increasing wt.% of hard PBS segments, which can be described by the Gordon-Taylor equation. Increasing the soft DLS segment content in the copolymer series resulted in an increase in the elastic behavior of the polymers. The broad range of crystallization temperatures and melt flow index values indicates that a polyester library with customizable properties that spans PBS applications has been successfully obtained. 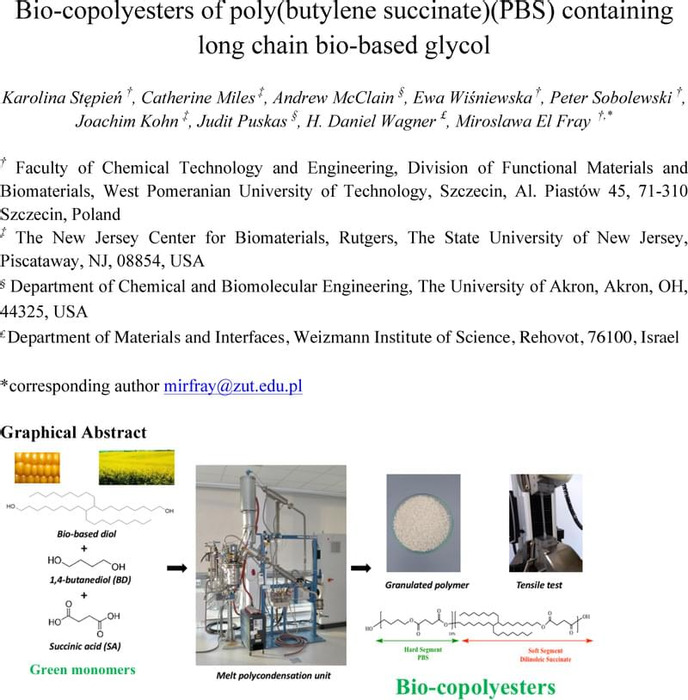 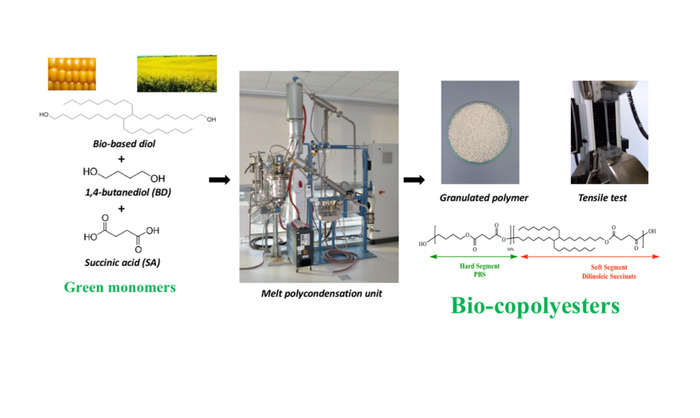 We are encoding your file so that it is compatible across browsers, depending on file size and type this may take some time.
GraphicalAbs

The authors declare no competing financial interests or conflicts.