The rattling and rotation behaviours of the hydrated excess proton (H+) in water are investigated using the density functional theory–quantum chemical cluster model (DFT-CM) method. The rattling pathways for the target proton *H+ between two adjacent O atoms in the form of Zundel configurations with symmetrical solvation environments are obtained. The zero-point contribution reduces the reaction energy barrier and enables the rattling to occur spontaneously at room temperature. The rotational behaviour of *H+ in the form of *H+·H2O* is found. Upon *H+·H2O* rotation, *H+ changes its position accompanied by concerted displacement of surrounding solvent water molecules and the breaking and formation of hydrogen bonds. The “*H+·H2O* rotating migration mechanism” is proposed for the proton transfer mechanism in water — the same *H+ migrates via *H+·H2O* rotation through void in solvent water, rather than different protons hopping along water hydrogen bond chains as known as the Grotthuss mechanism. 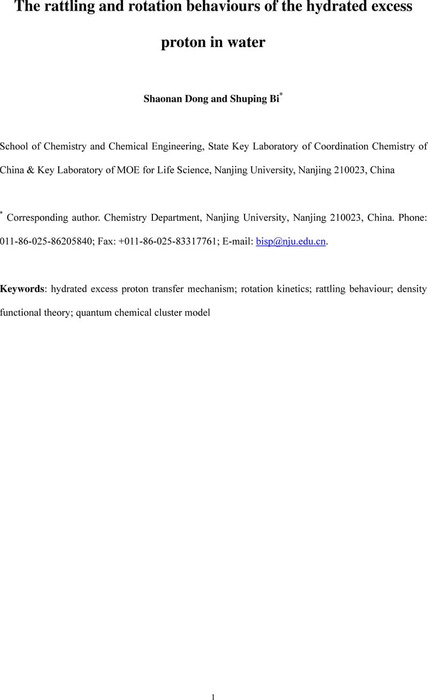