Membranes with polyamide thin film active layer are used in reverse osmosis based water desalination applications. Incorporation of graphene oxide nanoplatelets (GONPs) in the polyamide layer can alter the surface characteristics, permeability, selectivity, and can enhance the chlorine resistance of these membranes. In this study, a layer-by-layer (LbL) synthesis technique has been developed for embedding GONPs in polyamide layer. Polyamide layers with GONPs were synthesized in various sequences, such as alternating layers of GONPs and polyamide, and GONPs on top of the polyamide layer. Incorporation of GONPs resulted in an increase of surface hydrophilicity, as captured by the change of the water contact angle. Water flux and salt rejection properties of synthesized membranes have been investigated by using a dead-end cell. The salt rejection ability of membranes increased slightly with the incorporation of GONPs, while the water flux found to be similar to that observed for the pristine membranes without GONPs. Upon exposure to chlorine, GONPs embedded membranes retained salt rejection performance better than the pristine membranes. Our approach provides an alternative framework to incorporate nanoparticles in thin film membranes in a precise manner and to investigate the effect of such nanoparticles on the membrane performances. 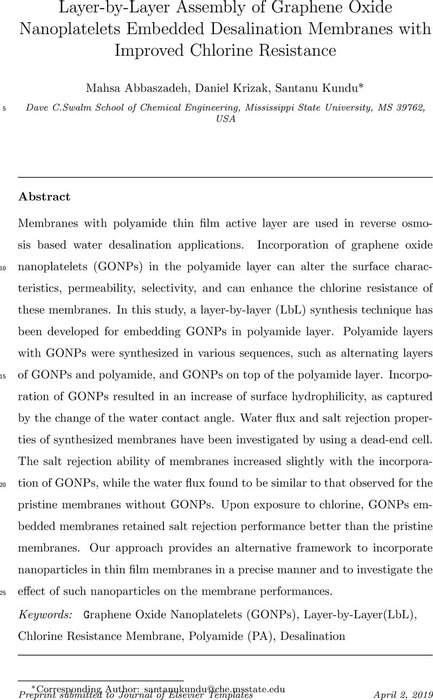