A Micellar Mitotane Formulation with High Drug Loading and Solubility: Physico-Chemical Characterization and Cytotoxicity Studies in 2D and 3D in Vitro Tumor Models.

Adrenocortical carcinoma (ACC) is a rare tumor and prognosis is overall poor but heterogeneous. Mitotane (MT) has been used for treatment of ACC for decades, either alone or in combination with cytotoxic chemotherapy. Even at doses up to 6 g per day, more than half of the patients do not achieve targeted plasma concentration (14-20 mg/L) even after many months of treatment which is caused by low water solubility and unfavorable pharmacokinetic properties such as poor bioavailability and high volume of distribution of MT. The clinical need and previously reported extraordinary high drug loading of poly(2-methyl-2-oxazoline)-block-poly(2-butyl-2-oxazoline)-block-poly(2-methyl-2-oxazoline) (A-pBuOx-A) based micelles for paclitaxel (PTX), led us to develop MT loaded micelles which may enable an injectable formulation. We successfully solubilized up to 6 g/L of MT in an aqueous formulation. The MT loaded nanoformulations were characterized by Fourier transform infrared spectroscopy (FT-IR), differential scanning calorimetry (DSC) and powder X-ray


diffraction (XRD), confirmed the amorphous nature of drug in the formulations. The polymer itself did not show cytotoxicity in adrenal and liver cell lines. By using the ACC model cell line NCI-H295 both in monolayers and tumor cell spheroids, we demonstrated micellar MT to exhibit comparable efficacy to its ethanol solution. We postulate that this formulation would be suitable for i.v. application and more rapid attainment of therapeutic plasma concentrations. In conclusion, we consider our micellar formulation a promising tool to alleviate major drawbacks of current MT treatment while retaining bioactivity towards ACC in vitro. 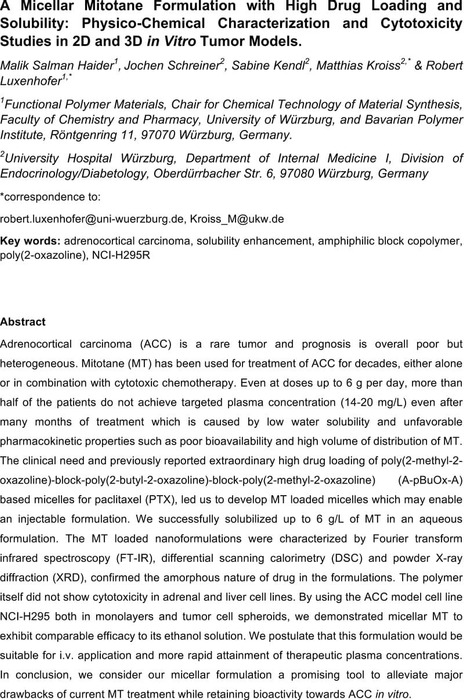 download asset Mitotane nanoformulation first submission.pdf 5 MB [opens in a new tab] cloud_download
pdf : 5 MB
We are encoding your file so that it is compatible across browsers, depending on file size and type this may take some time.

RL is listed as co-inventor of several patents pertinent to the present contribution and is cofounder of Delaqua Pharmaceutical Inc. intending commercial development of poly(2-oxazoline) based drug delivery systems.