An accurate scoring function is expected to correctly select the most stable structure from a set of pose candidates. One can hypothesize that a scoring function’s ability to identify the most stable structure might be improved by emphasizing the most relevant atom pairwise interactions. However, it is hard to evaluate the relevant importance for each atom pair using traditional means. With the introduction of machine learning methods, it has become possible to determine the relative importance for each atom pair present in a scoring function. In this work, we use the Random Forest (RF) method to refine a pair potential developed by our laboratory (GARF6) by identifying relevant atom pairs that optimize the performance of the potential on our given task. Our goal is to construct a machine learning (ML) model that can accurately differentiate the native ligand binding pose from candidate poses using a potential refined by RF optimization. We successfully constructed RF models on an unbalanced data set with the ‘comparison’ concept and, the resultant RF models were tested on CASF-2013.5 In a comparison of the performance of our RF models against 29 scoring functions, we found our models outperformed the other scoring functions in predicting the native pose. In addition, we used two artificial designed potential models to address the importance of the GARF potential in the RF models: (1) a scrambled probability function set, which was obtained by mixing up atom pairs and probability functions in GARF, and (2) a uniform probability function set, which share the same peak positions with GARF but have fixed peak heights. The results of accuracy comparison from RF models based on the scrambled, uniform, and original GARF potential clearly showed that the peak positions in the GARF potential are important while the well depths are not. 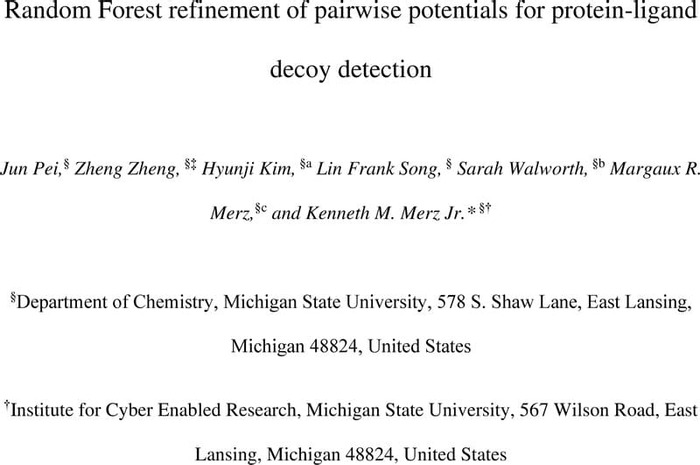 We are encoding your file so that it is compatible across browsers, depending on file size and type this may take some time.
supporting info