Acetylcholine and S-adenosylmethionine exemplify the tetraalkylammonium (R4N+) and trialkylsulfonium (R3S+) ions used by Nature. The corresponding trialkyloxonium ions (R3O+), however, do not play a central role in biology most likely due to their hydrolytic instability compared with their ammonium and sulfonium counterparts. Indeed, Meerwein’s salts [(CH3)3O+BF4– and (CH3CH2)3O+BF4–], the simplest of the trialkyloxonium ions, are among the most powerful alkylating agents known, and they too are unstable to water. Only recently have water stable trialkyloxonium ions been reported which contain an oxatriquinane skeleton. Interestingly, despite the inherent hydrolytic instability of the vast majority of trialkyloxonium ions, they have been postulated as key intermediates in the biosynthesis of a number of complex natural products from Laurencia species. The existence of these complex trialkyloxonium ions has been implied from the structural and stereochemical diversity of these natural products and is supported by elegant biomimetic total syntheses, yet no direct evidence for their existence has been forthcoming. Herein, we report the synthesis and full characterisation of one family of these biosynthetically relevant trialkyloxonium ions - the most structurally and stereochemically complex oxonium ions characterised to date. Additionally, the elucidation of their in vitro reactivity profile has resulted in the synthesis of more than ten complex halogenated natural products. This work substantiates the existence of complex trialkyloxonium ions as key reactive intermediates in the biosynthesis of numerous halogenated natural products from L. spp. – expanding Nature’s rich inventory of onium ions. 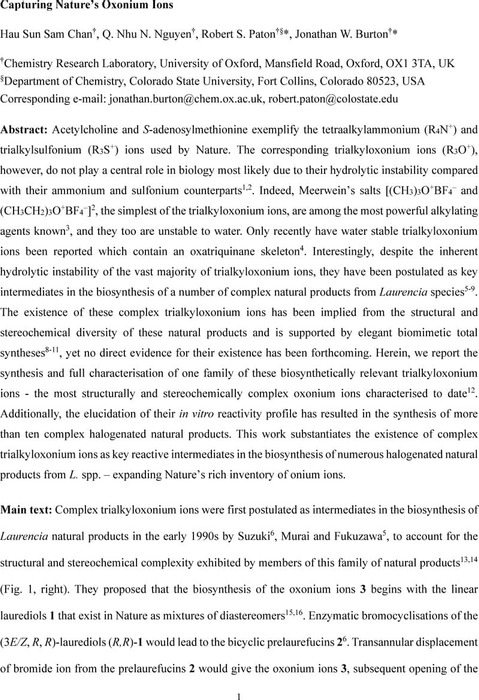 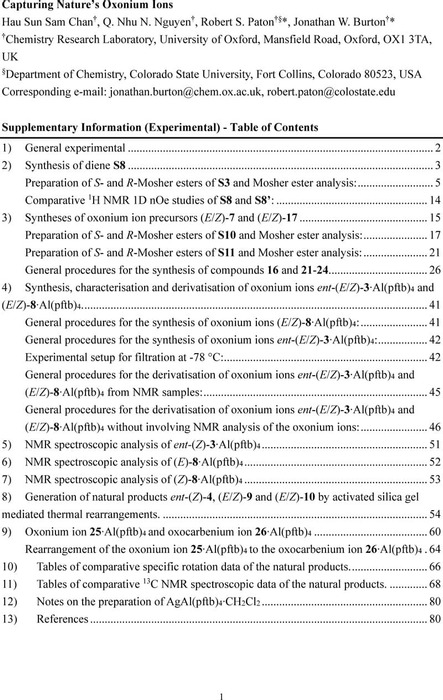 We are encoding your file so that it is compatible across browsers, depending on file size and type this may take some time.
Oxonium Supplementary Information - Synthesis (Experimental) 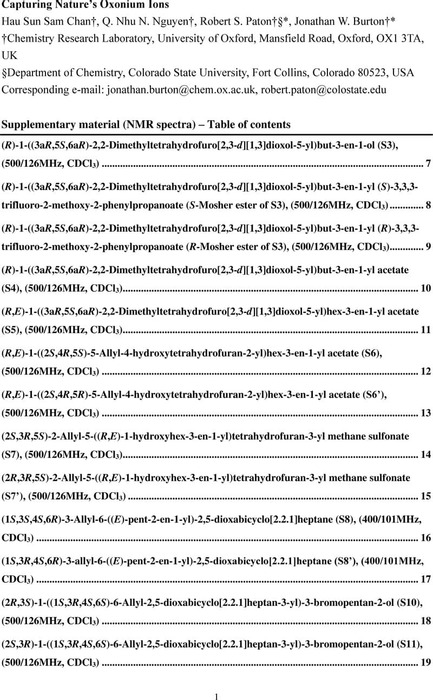 We are encoding your file so that it is compatible across browsers, depending on file size and type this may take some time.
Oxonium Supplementary Information - Synthesis (NMR)