Fingermarks are an important form of crime-scene trace evidence; however, their usefulness may be hampered by a variation in response or a lack of robustness in detection methods. Understanding the chemical composition and distribution within fingermarks may help explain variation in latent fingermark detection with existing methods and identify new strategies to increase detection capabilities. The majority of research in the literature describes investigation of organic components of fingermark residue, leaving the elemental distribution less well understood. The relative scarcity of information regarding the elemental distribution within fingermarks is in part due to previous unavailability of direct, micron resolution elemental mapping techniques. This capability is now provided at third generation synchrotron light sources, where X-ray Fluorescence Microscopy (XFM) provides micron or sub-micron spatial resolution and direct detection with sub-μM detection limits. XFM has been applied in this study to reveal the distribution of inorganic components within fingermark residue, including endogenous trace metals (Fe, Cu, Zn), diffusible ions (Cl-, K+, Ca2+), and exogeneous metals (Ni, Ti, Bi). This study incorporated a multi-modal approach using XFM and Infrared Microspectroscopy (IRM) analyses to demonstrate co-localisation of endogenous metals within the hydrophilic organic components of fingermark residue. Additional experiments were then undertaken to investigate how sources of exogenous metals (e.g. coins and cosmetics) may be transferred to, and distributed within latent fingermarks. Lastly, this study reports a preliminary assessment of how environmental factors such as exposure to aqueous environments may effect elemental distribution within fingermarks. Taken together, the results of this study advance our current understanding of fingermark composition and its spatial distribution of chemical components, and may help explain detection variation observed during detection of fingermarks using standard forensic protocols. 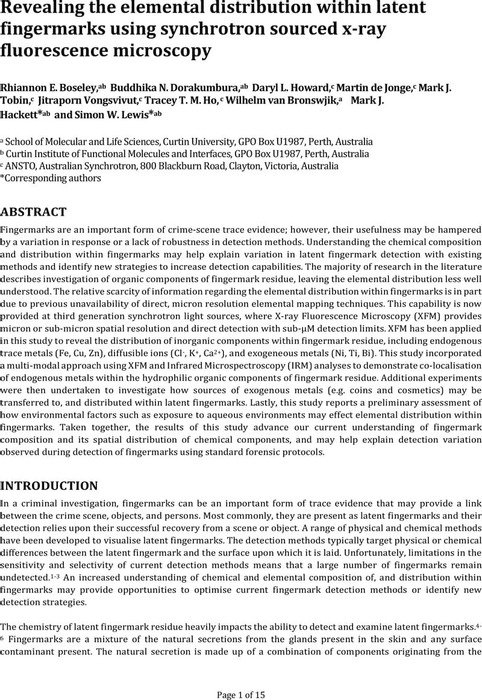 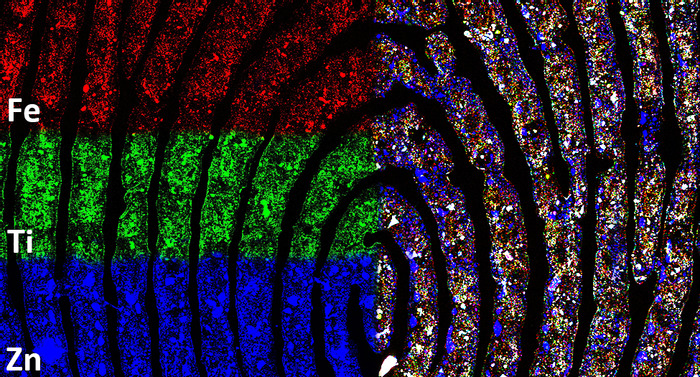 We are encoding your file so that it is compatible across browsers, depending on file size and type this may take some time.
XFM Mapping Fingermarks TOCentry 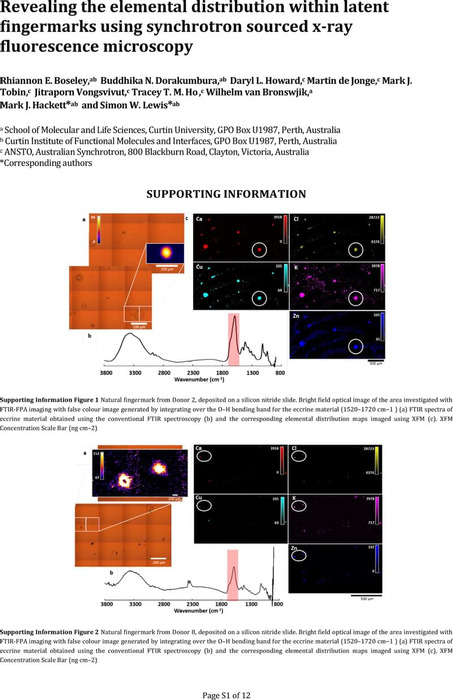 We are encoding your file so that it is compatible across browsers, depending on file size and type this may take some time.
XFM Mapping Fingermarks SupportingInfo V1