Vascular Endothelial Growth Factor A(VEGFA) stimulates angiogenesis in human endothelial cells and increasing its expression is a potential treatment for heart failure, currently accomplished via gene or mRNA therapy. Herein, we describe a designed small molecule (TGP-377) that specifically and potently enhances VEGFA expression by targeting of a non-coding microRNA that regulates its expression. This investigation was initiated by studying the RNA motifs that bound small molecules from a subset of the AstraZeneca compound collection. A two-dimensional combinatorial screen (2DCS) revealed preferences in small molecule chemotypes that bind RNA and preferences in the RNA motifs that bind small molecules, increasing the known information by 20-fold. Analysis of this dataset against the RNA-mediated pathways that regulate VEGFA defined that the microRNA-377 precursor (pre-miR-377), which represses VEGFAmRNA translation, is druggable in a selective manner. The compound potently and specifically upregulated VEGFA in Human Umbilical Vein Endothelial Cells (HUVEC). Analysis of the proteome and angiogenic phenotype affected by TGP-377 demonstrated that the compound is highly potent and selective. These studies illustrate the power of 2DCS to define molecular recognition events between “undruggable” biomolecules and small molecules and the ability of sequence-based design to deliver efficacious compounds that target RNA and precisely and potently modulate disease-associated pathways. 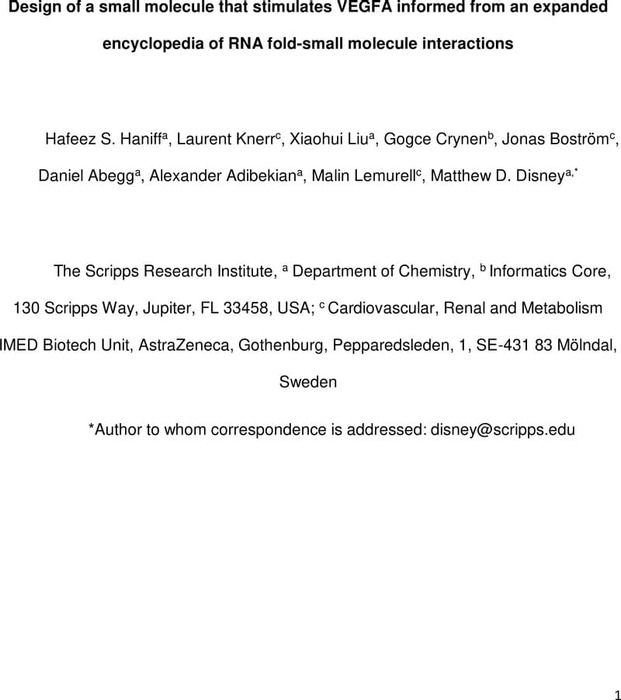 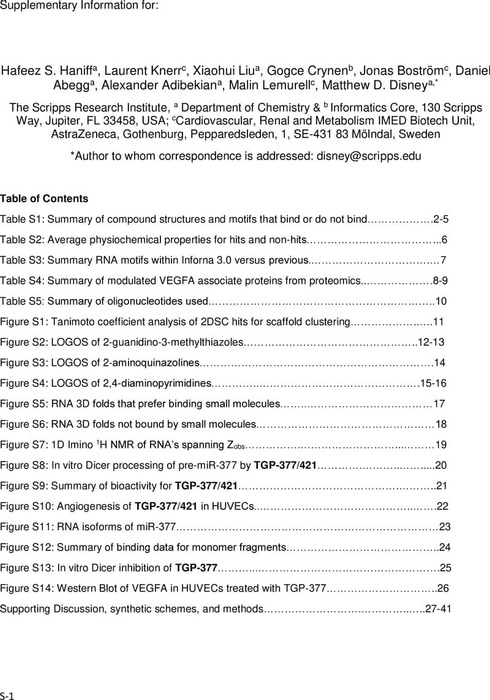 We are encoding your file so that it is compatible across browsers, depending on file size and type this may take some time.
miR-377 Supplementary Information 4 8 2019

We are encoding your file so that it is compatible across browsers, depending on file size and type this may take some time.
Proteomic analysis

MDD is a founder of expansion therapeutics