Despite the major advances in n-type transparent conductors (TCs), the scarcity and performance of an equivalent p-type TC has been a stumbling block for the opto-electronics industry for decades. Solid design principles such as the 'chemical modulation of the valence band', where the Cu 3d states mix with the anion 'p' states have allowed for the identification of many Cu(I)-based oxides, chalcogenides and even pnictides. Due to advances in thin film fabrication techniques, the controlled formation of layered materials has become a more facile task allowing new materials such as [Cu2S2][Sr3Sc2O5] to surface as potential candidates. [Cu2S2][Sr3Sc2O5] has been shown to have a wide optical band gap (~3.1eV) and has claims of high hole mobilities. Using chemical intuition for designer cation choice in the perovskite layer ([Sr3Sc2O5]), we have screened 24 variants of this structure type using high throughput density functional theory. Our calculations have uncovered 8 new thermodynamically stable semiconductors, with applications ranging from transparent conductors to photovoltaics. Our predictions have been validated by experimental synthesis of a new p-type TC, with a conductivity superior to all known p-type TCs. 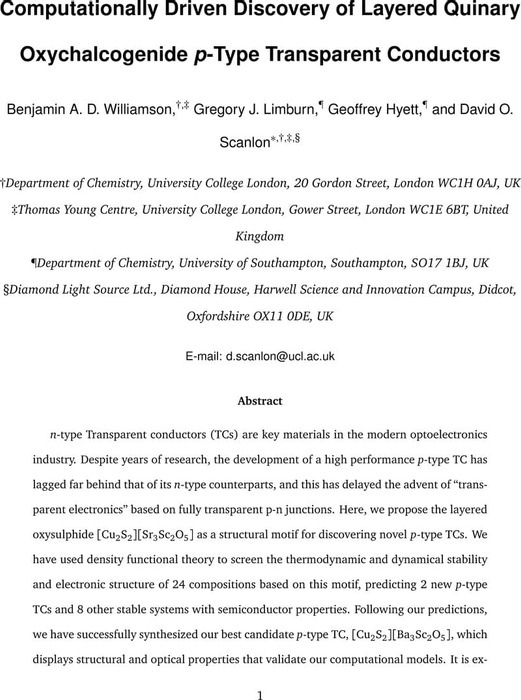 We are encoding your file so that it is compatible across browsers, depending on file size and type this may take some time.
si