This work reports on the assembly of imine-linked macrocycles that serve as models of two-dimensional covalent organic frameworks (2D COFs). Interlayer interactions play an important role in the formation of 2D COFs, yet the effect of monomer structure on COF formation, crystallinity, and susceptibility to exfoliation are not well understood. For example, monomers with both electron-rich and electron-poor π-electron systems have been proposed to strengthen interlayer inter-actions and improve crystallinity. Here we probe these effects by studying the stacking behavior of imine-linked macrocycles that represent discrete models of 2D COFs.
Specifically, macrocycles based on terephthaldehyde (PDA) or 2,5-dimethoxyterephthaldehyde (DMPDA) stack upon cooling molecularly dissolved solutions. Both macrocycles assemble cooperatively with similar ΔHe values of -97 kJ/mol and -101 kJ/mol, respectively, although the DMPDA macrocycle assembly process showed a more straightforward temperature dependence. Circular dichroism spectroscopy performed on macrocycles bearing chiral side chains revealed a helix reversion process for the PDA macrocycles that was not observed for the DMPDA macrocycles.
Given the structural similarity of these monomers, these findings demonstrate that the stacking processes associated with nanotubes derived from these macrocycles, as well as for the corresponding COFs, are complex and susceptible to kinetic traps, casting doubt on the relevance of thermodynamic arguments for improving materials quality. 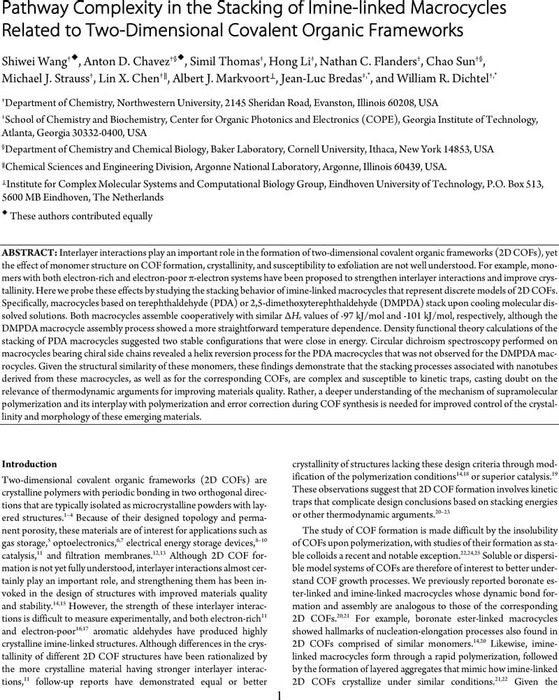 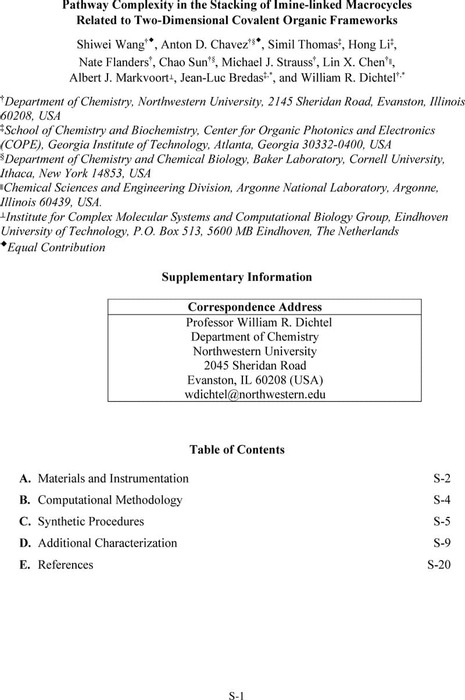 We are encoding your file so that it is compatible across browsers, depending on file size and type this may take some time.
2019 03 ChemRxiv MacrocycleAssembly Wang SI

We are encoding your file so that it is compatible across browsers, depending on file size and type this may take some time.
TOC3