For several decades, zeolites have acted as a porous bridge intimately connecting mineralogy to advanced technology through industrial applications. Such a key linkage between mineral and material science has been reinvigorated by the numerous successes of computational modeling. The intriguing
relationships between synthetic zeolites and their natural counterparts unveiled by theoretical studies have greatly contributed to improve the properties and practical applications of zeolite-based materials in various technological areas ranging from industrial catalysis, to environmental protection, up to
advanced optics, electronics, and solar energy harvesting. To pinpoint the key role of modeling in zeolite science, we focus herein on a simple yet instructive example of computational-driven problemsolving: can tetrahedral frameworks sustain straight (i.e. 180°) Si-O-Si bond angles? Indeed, the true crystal symmetry of zeolite ferrierite, especially in its all-silica form, has been intensely debated for 30 years before being solved in the Pmnn space group. Yet there are indications that an Immm structure, featuring energetically unfavourable flat (180°) Si-O-Si angles, could be formed at high temperature. To provide insight on this issue, we perform density functional theory optimizations and frequency calculations of all-silica ferrierite in both the Pmnn and Immm space groups. Our results indicate that Pmnn is more stable than Immm, in line with experiments. While the Pmnn structure is a true minimum in the free energy profile of ferrierite, the Immm structure has four imaginary frequency vibrations, two of which are localized on the 180° Si-O-Si angles. This suggest that ferrierites with Immm symmetry may be classified as metastable phases. Such a designation is also supported by firstprinciples molecular dynamics on Immm FER, evidencing that the average value of 180° actually results from Si-O-Si angle inversion. An exciting implication of this study with interesting geological and technological consequences is the possible association of flat Si-O-Si angles experimentally detected in open-framework silicates to metastable structures characterized by pore openings more circular than in the corresponding equilibrium structures. Such a lower channel ellipticity might play an important role in sorption phenomena, which are ubiquitous in geological processes and industrial applications alike. More in general, this work underlines how highly complex processes involving zeolite materials can be understood and accurately captured using theoretical techniques. 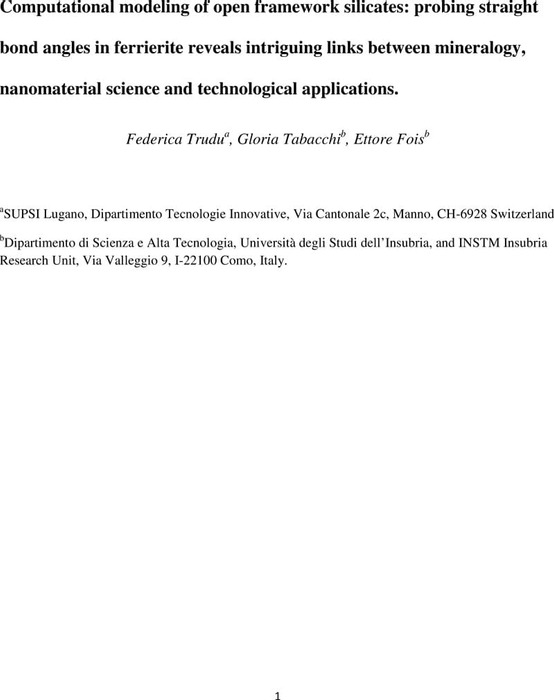 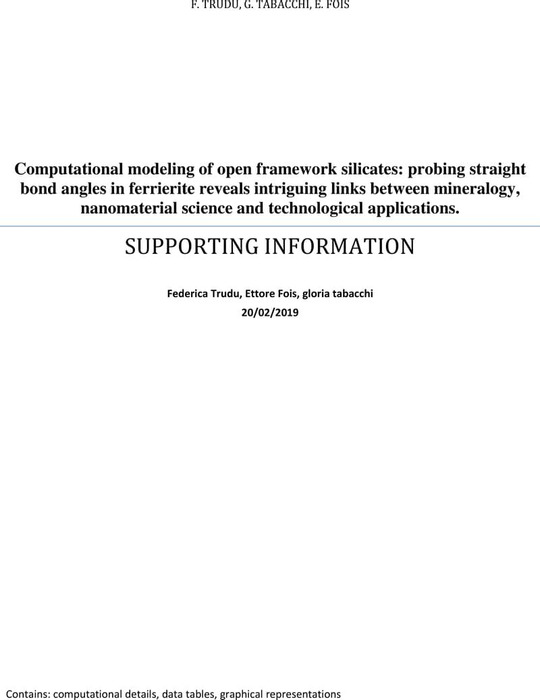 We are encoding your file so that it is compatible across browsers, depending on file size and type this may take some time.
Supporting Information Trudu et al 20022019

We are encoding your file so that it is compatible across browsers, depending on file size and type this may take some time.
CIF files Trudu et al 20022019

NO CONFLICT OF INTEREST