Rapid progression in genetic modification research has made gene editing increasingly cheaper and easier to use. CRISPR-Cas9 for example, allows for the specific alteration of the genome of an organism with relative simplicity and low costs. This raised a worrying question; can genetic modification techniques be used to create novel bioweapons? A specific scenario is the initiation of a synthetic gene drive for malicious purposes. A synthetic gene drive can be used to quickly spread a mutation through an entire population. This mutation could alter vectors in such a way that they will spread human diseases or eradicate essential organisms. Since a gene drive spreads efficiently through a population, timely detection is essential. Thus, a quick and field deployable screening method is needed to counteract the malicious use of gene drives.

Here, we show a battery-operated, sensitive screening method, named CRISPR-Clear, for the detection of gene drive modified organisms. CRISPR-Clear is based on the combination of three components: 1) A DNA amplification technique known as loop-mediated isothermal amplification (LAMP) for detecting the presence of a gene drive; b) a portable battery-operated Arduino device which heats up the sample to allow DNA amplification, and c) a naked-eye visualization of the results.

We designed and tested six LAMP primers targeting a Cas9 endonuclease-based gene drive, assembled a battery-operated Arduino device and tested the naked-eye visualization method. In addition, we were able to detect the presence of the Cas9 gene, extracted from a transformed bacteria, providing a proof-of-concept of the CRISPR-Clear device. 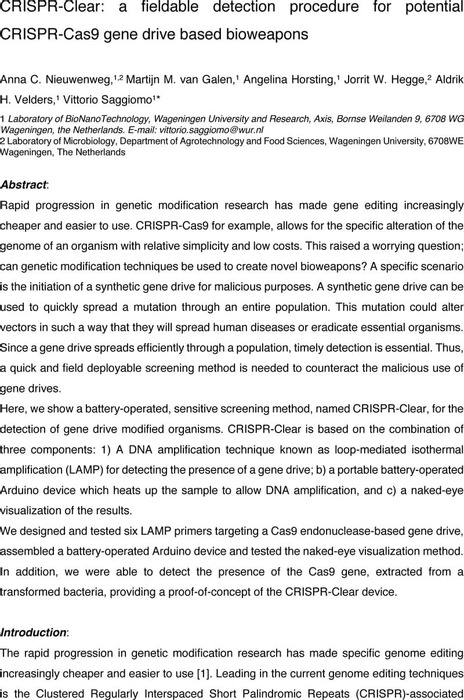 download asset CRISPR_Clear_Final.pdf 4 MB [opens in a new tab] cloud_download
pdf : 4 MB
We are encoding your file so that it is compatible across browsers, depending on file size and type this may take some time. 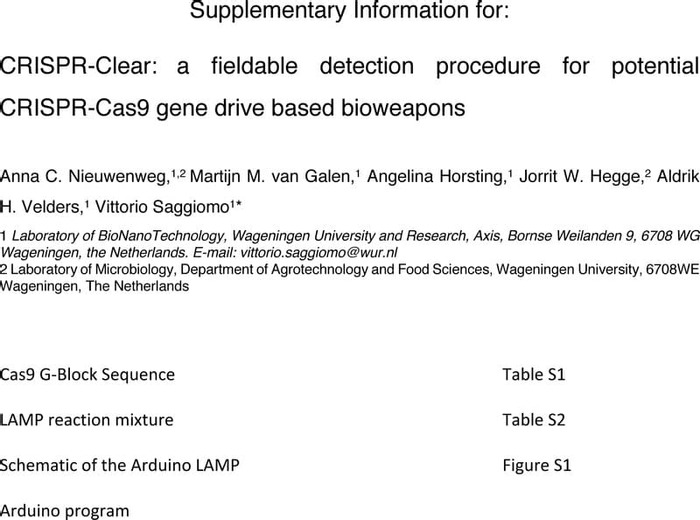 download asset Supplementary .pdf 0.39 MB [opens in a new tab] cloud_download
pdf : 0.39 MB
We are encoding your file so that it is compatible across browsers, depending on file size and type this may take some time.
Supplementary

No conflict of interests