The D4 model is presented for the accurate computation of London dispersion interactions in density functional theory approximations (DFT-D4) and generally for atomistic modeling methods. In this successor to the DFT-D3 model, the atomic coordination-dependent dipole polarizabilities are scaled based on atomic partial charges which can be taken from various sources. For this purpose, a new charge-dependent parameter-economic scaling function is designed. Classical charges are obtained from an atomic electronegativity equilibration procedure for which efficient analytical derivatives are developed. A numerical Casimir-Polder integration of the atom-in-molecule dynamic polarizabilities yields charge- and geometry-dependent dipole-dipole dispersion coefficients. Similar to the D3 model, the dynamic polarizabilities are pre-computed by time-dependent DFT and elements up to radon are covered. For a benchmark set of 1225 dispersion coefficients, the D4 model achieves an unprecedented accuracy with a mean relative deviation of 3.8% compared to 4.7% for D3. In addition to the two-body part, three-body effects are described by an Axilrod-Teller-Muto term. A common many-body dispersion expansion was extensively tested and an energy correction based on D4 polarizabilities is found to be advantageous for some larger systems. Becke-Johnson-type damping parameters for DFT-D4 are determined for more than 60 common functionals. For various energy benchmark sets DFT-D4 slightly outperforms DFT-D3. Especially for metal containing systems, the introduced charge dependence improves thermochemical properties. We suggest (DFT-)D4 as a physically improved and more sophisticated dispersion model in place of DFT-D3 for DFT calculations as well as for other low-cost approaches like semi-empirical models.

Correction of several typos and general shortening of the abstract. We added a new EEQ parametrization and we updated the BJ-damping parameter (for D4-ATM and for D4-MBD with EEQ partial charges). Furthermore, all benchmark sets have been re-calculated for the updated parametrizations. 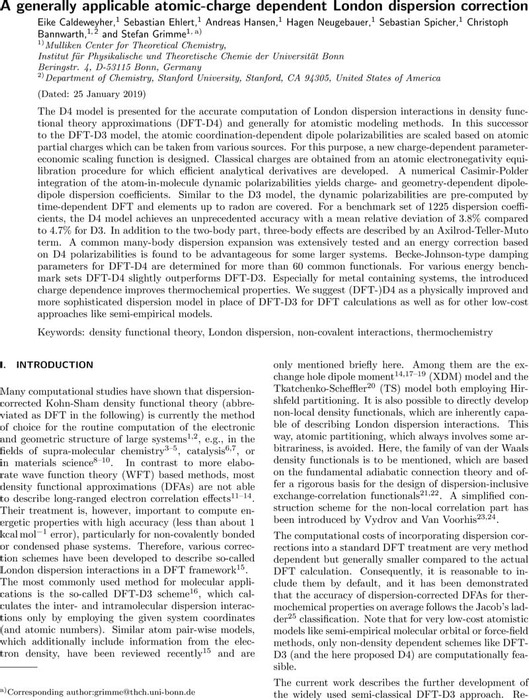 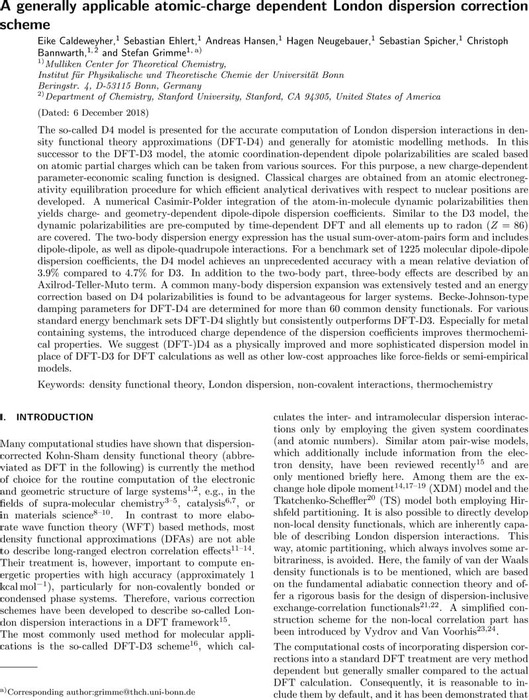 We are encoding your file so that it is compatible across browsers, depending on file size and type this may take some time.
chemrxiv

DFG in the framework of the priority Program No. SPP 1807, ”Control of Dispersion Interactions in Chemistry”