Conformational Sampling and Polarization of Asp26 in pKa Calculations of Thioredoxin

Thioredoxin is a protein that has been used as model system by various computational methods to predict the pKa of aspartate residue Asp26 which is 3.5 units higher than a solvent exposed one (e.g Asp20). Here, we use extensive atomistic molecular dynamics simulations of two different protonation states of Asp26 in combination with conformational analysis based on RMSD clustering and principle component analysis to identify representative conformations of the protein in solution. For each conformation the Gibbs free energy of proton transfer between Asp26 and Asp20, which is fully solvated in a loop region of the protein, is calculated with the Amber99sb force field in alchemical transformations. The varying polarization of the two residues in different molecular environments and protonation states is described by Hirshfeld-I (HI) atomic charges obtained from the averaged polarized electron density. Our results show that the Gibbs free energy of proton transfer is dependent on the protein conformation, the proper sampling of the neighbouring Lys57 residue orientations and on water molecules entering the hydrophobic cavity upon deprotonating Asp26. The inclusion of the polarization of both aspartate residues in the free energy cycle by the HI atomic charges improves the results from the nonpolarizable force field and reproduces the experimental pKa value of Asp26. 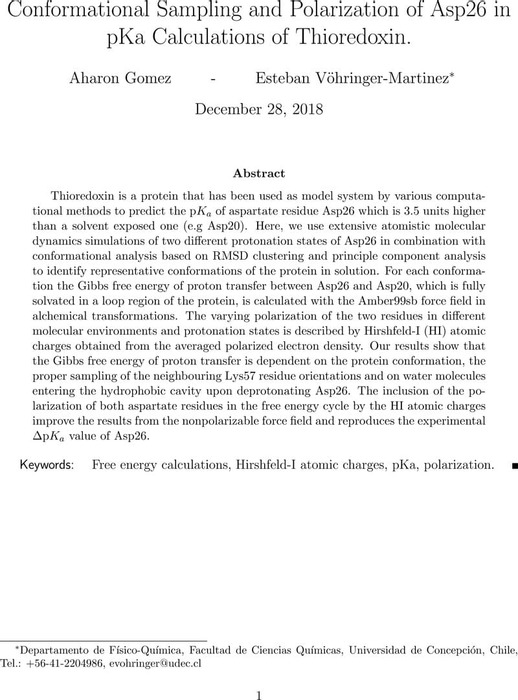 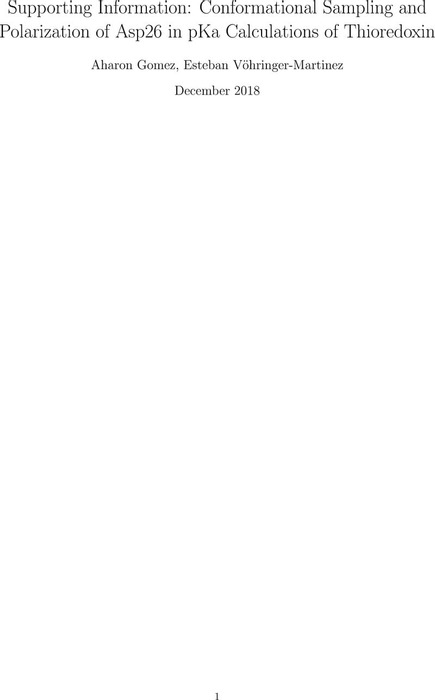 We are encoding your file so that it is compatible across browsers, depending on file size and type this may take some time.
Si pka thioredoxin