Selective Inhibition of Histone Deacetylase 10: Hydrogen Bonding to the Gatekeeper Residue is Implicated

The discovery of isozyme-selective histone deacetylase (HDAC) inhibitors is critical for understanding the biological functions of individual HDACs and for validating HDACs as clinical drug targets. The isozyme HDAC10 contributes to chemotherapy resistance via inhibition of autophagic flux and has recently been described to be a polyamine deacetylase, but no studies directed toward selective HDAC10 inhibitors have been published. Herein, we disclose that the use of two complementary ligand-displacement assays has revealed unexpectedly potent HDAC10 binding of tubastatin A, which has been previously described as a highly selective HDAC6 inhibitor. We synthesized a targeted selection of tubastatin A derivatives and found that a basic amine in the cap group was required for strong HDAC10, but not HDAC6, binding. Only potent HDAC10 binders mimicked HDAC10 knockdown by causing dose-dependent accumulation of acidic vesicles in the BE(2)-C neuroblastoma cell line. Docking of inhibitors into human HDAC10 homology models indicated that a hydrogen-bond between a basic cap group nitrogen and the HDAC10 gatekeeper residue Glu272 was responsible for potent HDAC10 binding. Taken together, the presented assays and homology models provide an optimal platform for the development of HDAC10-selective inhibitors, as exemplified with the tubastatin A scaffold. 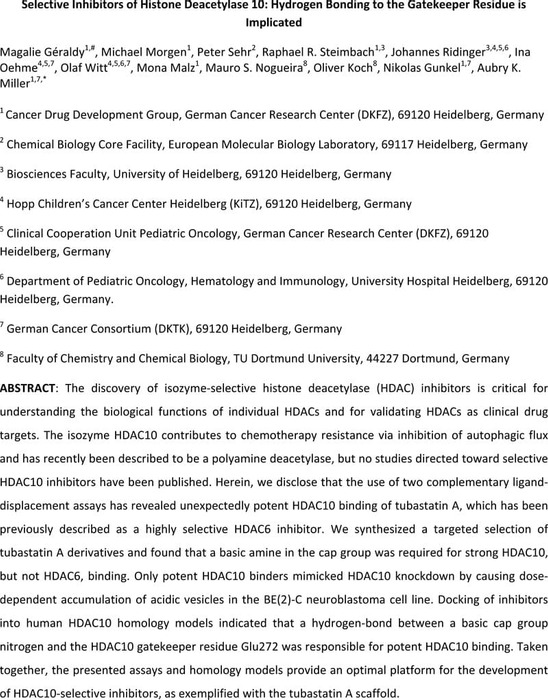 We are encoding your file so that it is compatible across browsers, depending on file size and type this may take some time.
Graphical Abstract 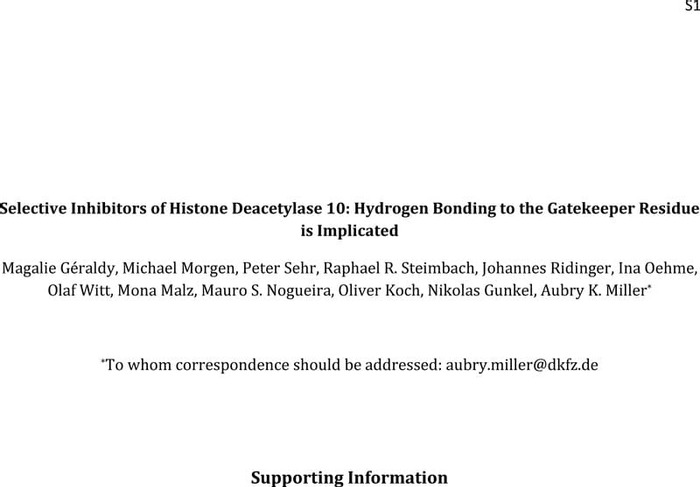 We are encoding your file so that it is compatible across browsers, depending on file size and type this may take some time.
Supplementary Information