Ibogaine is a psychedelic alkaloid which has been subject of intense scientific research due to its reported ability to attenuate drug-seeking behavior. Recent work suggested that ibogaine effects on alcohol self-administration in rats was related to the release of Glial Cell Derived Neurotrophic Factor (GDNF) in the Ventral Tegmental Area (VTA), a mesencephalic region which hosts soma of dopamine neurons. It is well known that neurotrophic factors (NFs) mediate the neuroadaptations induced in the mesocorticolimbic dopaminergic system by repeated exposure to drugs. Although previous reports have shown ibogaine´s ability to induce GDNF expression in rat midbrain, there are no studies addressing its effect on the expression of GDNF, Brain Derived Neurotrophic Factor (BDNF) or Nerve Growth Factor (NGF) in distinct regions containing dopaminergic neurons. In this work, we examined the effect of ibogaine acute administration on the expression of these NFs in the VTA, Prefrontal Cortex (PFC), Nucleus Accumbens (NAcc) and the Substantia Nigra (SN). Thus, rats were i.p. treated with ibogaine 20 mg/kg (I20), 40 mg/kg (I40) or vehicle, and NFs expression was analyzed after 3 and 24 hours. Only at 24 h an increase of the expression for the three NFs were observed in a site and dose dependent manner. Results for GDNF showed that only I40 selectively upregulated its expression in the VTA and SN. Both doses of ibogaine elicited a large increase in the expression of BDNF in the NAcc, SN and PFC, while a significant effect was found in the VTA only for I40. Finally, NGF was found to be upregulated in all regions after I40, while a selective upregulation was found in PFC and VTA for the I20 treatment. An increase in the content of mature GDNF was observed in the VTA but no significant increase in the mature BDNF protein content was found in all the studied areas. Interestingly, an increase in the content of proBDNF was detected in the NAcc for both treatments. Further research is needed to understand the neurochemical bases of these changes, and to confirm their contribution to the anti-addictive properties of ibogaine. 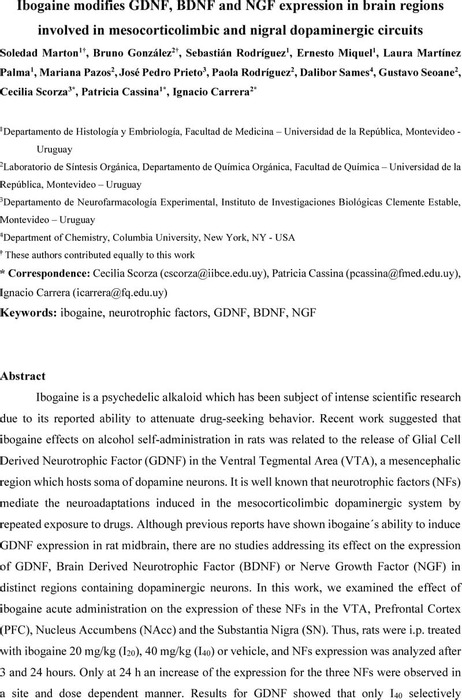 The authors declare that the research was conducted in the absence of any commercial or financial relationships that could be considered as a potential conflict of interest.