Redox flow batteries are attractive for large-scale electrochemical energy storage, but sluggish electron transfer kinetics often limit their overall energy conversion efficiencies. In an effort to improve our understanding of these kinetic limitations in transition metal based flow batteries, we used rotating-disk electrode voltammetry to characterize the electron-transfer rates of the Fe3+/2+ redox couple at glassy carbon electrodes whose surfaces were modified using several pre-treatment protocols. We found that surface activation by electrochemical cycling in H2SO4(aq) electrolyte resulted in the fastest electron-transfer kinetics: j0 = 0:90 mA/cm2 in an electrolyte containing 10 mM total Fe. By contrast, electrodes that were chemically treated to either remove or promote surface oxidation yielded rates that were at least an order of magnitude slower: j0 = 0:07 and 0:08 mA/cm2, respectively. By correlating these findings with X-ray photoelectron spectroscopy data, we conclude that Fe3+/2+ redox chemistry is catalyzed by carbonyl groups whose surface concentrations are increased by electrochemical activation. 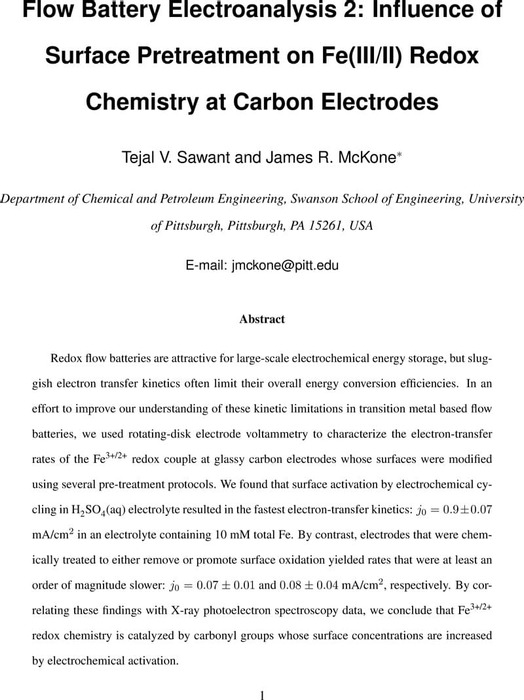 download asset Flow Battery 2-Main.pdf 1 MB [opens in a new tab] cloud_download
pdf : 1 MB
We are encoding your file so that it is compatible across browsers, depending on file size and type this may take some time. 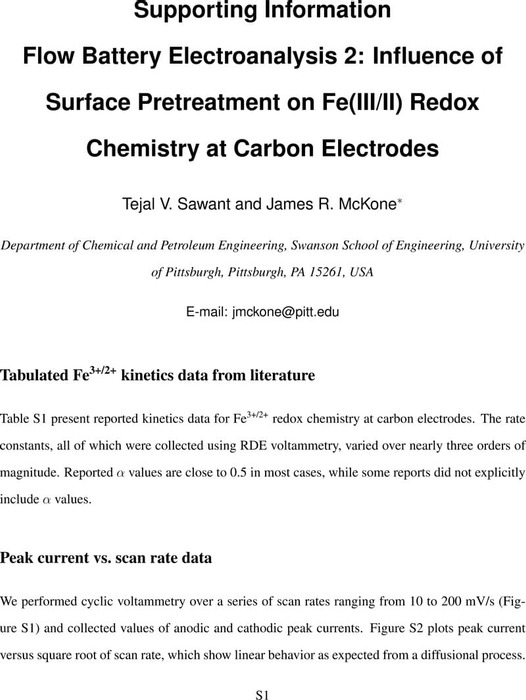 download asset Flow Battery 2- SI.pdf 1 MB [opens in a new tab] cloud_download
pdf : 1 MB
We are encoding your file so that it is compatible across browsers, depending on file size and type this may take some time.
Flow Battery 2- SI