We have used scanning tunneling microscopy to create and study single molecule junctions with thioether-terminated oligothiophene molecules. We find that the conductance of these junctions increases upon formation of charge transfer complexes of the molecules with tetracyanoethene, and that the extent of the conductance increase is greater the longer is the oligothiophene, i.e. the lower is the conductance of the uncomplexed molecule in the junction. We use non-equilibrium Green's function transport calculations to explore the reasons for this theoretically, and find that new resonances appear in the transmission function, pinned close to the Fermi energy of the contacts, as a consequence of the charge transfer interaction. This is an example of a room temperature quantum interference effect, which in this case boosts junction conductance in contrast to earlier observations of QI that result in diminished conductance. 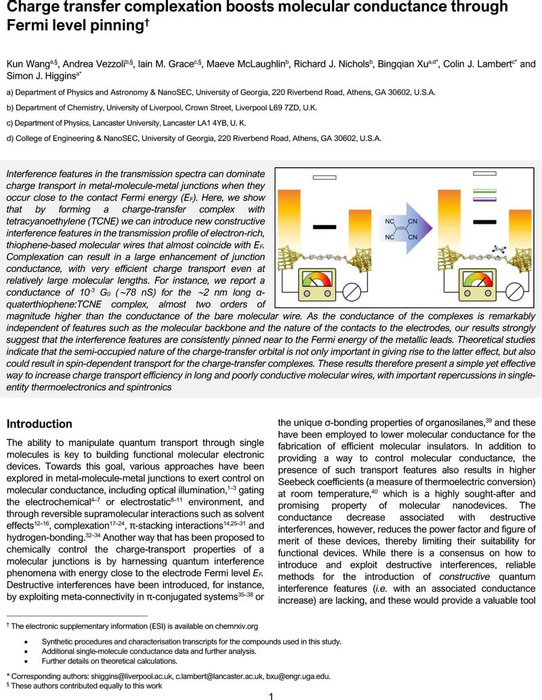 download asset WANG_FermiLevelPinningCT.pdf 0.51 MB [opens in a new tab] cloud_download
pdf : 0.51 MB
We are encoding your file so that it is compatible across browsers, depending on file size and type this may take some time. 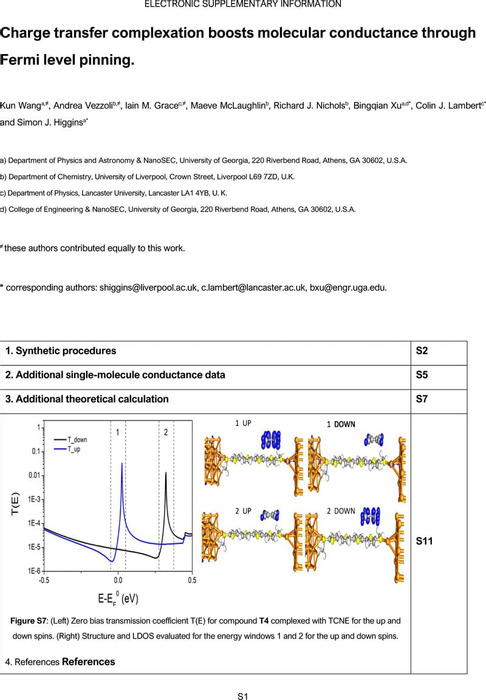 download asset SI_WANG_FermiLevelPinningCT.pdf 0.90 MB [opens in a new tab] cloud_download
pdf : 0.90 MB
We are encoding your file so that it is compatible across browsers, depending on file size and type this may take some time.
SI WANG FermiLevelPinningCT