Using electron spins within molecules for quantum information processing (QIP) was first proposed by Leuenberger and Loss (1), who showed how the Grover algorithm could be mapped onto a Mn12 cage (2). Since then several groups have examined two-level (S = ½) molecular spin systems as possible qubits (3-12). There has also been a report of the implementation of the Grover algorithm in a four-level molecular qudit (13). A major challenge is to protect the spin qubit from noise that causes loss of phase information; strategies to minimize the impact of noise on qubits can be categorized as corrective, reductive, or protective. Corrective approaches allow noise and correct for its impact on the qubit using advanced microwave pulse sequences (3). Reductive approaches reduce the noise by minimising the number of nearby nuclear spins (7-11), and increasing the rigidity of molecules to minimise the effect of vibrations (which can cause a fluctuating magnetic field via spin-orbit coupling) (9,11); this is essentially engineering the ligand shell surrounding the electron spin. A protective approach would seek to make the qubit less sensitive to noise: an example of the protective approach is the use of clock transitions to render spin states immune to magnetic fields at first order (12). Here we present a further protective method that would complement reductive and corrective approaches to enhancing quantum coherence in molecular qubits. The target is a molecular spin qubit with an effective 2S ground state: we achieve this with a family of divalent rare-earth molecules that have negligible magnetic anisotropy such that the isotropic nature of the electron spin renders the qubit markedly less sensitive to magnetic noise, allowing coherent spin manipulations even at room temperature. If combined with the other strategies, we believe this could lead to molecular qubits with substantial advantages over competing qubit proposals. 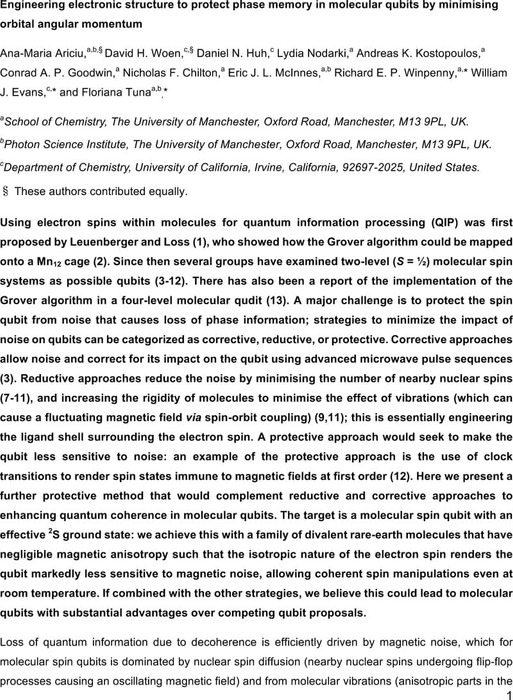