Advances in recent years have made molecular dynamics (MD) and Monte Carlo (MC) simulations powerful tools in molecular-level research, allowing the prediction of experimental observables in the study of systems such as proteins, membranes, and polymeric materials. However, the quality of any prediction based on molecular dynamics results will strongly depend on the validity of underlying physical assumptions.

Unphysical behavior of simulations can have significant influence on the results and reproducibility of these simulations, such as folding of proteins and DNA or properties of lipid bilayers determined by cutoff treatment, dynamics of peptides and polymers affected by the choice of thermostat, or liquid properties depending on the simulation time step. Motivated by such examples, we propose a two-fold approach to increase the robustness of molecular simulations. The first part of this approach involves tests which can be performed by the users of MD programs on their respective systems and setups. We present a number of tests of different complexity, ranging from simple post-processing analysis to more involved tests requiring additional simulations. These tests are shown to significantly increase the reliability of MD simulations by catching a number of common simulation errors violating physical assumptions, such as non-conservative integrators, deviations from the Boltzmann ensemble, and lack of ergodicity between degrees of freedom. To make the usage as easy as possible, we have developed an open-source and platform-independent Python library (https://physical-validation.readthedocs.io) implementing these tests.

The second part of the approach involves testing for code correctness. While unphysical behavior can be due to poor or incompatible choices of parameters by the user, it can just as well originate in coding errors within the program. We therefore propose to include physical validation tests in the code-checking mechanism of MD software packages. We have implemented such a validation for the GROMACS software package, ensuring that every major releases passes a number of physical sanity checks performed on selected representative systems before shipping. It is, to our knowledge, the first major molecular mechanics software package to run such validation routinely. The tests are, as the rest of the package, open source software, and can be adapted for other software packages. 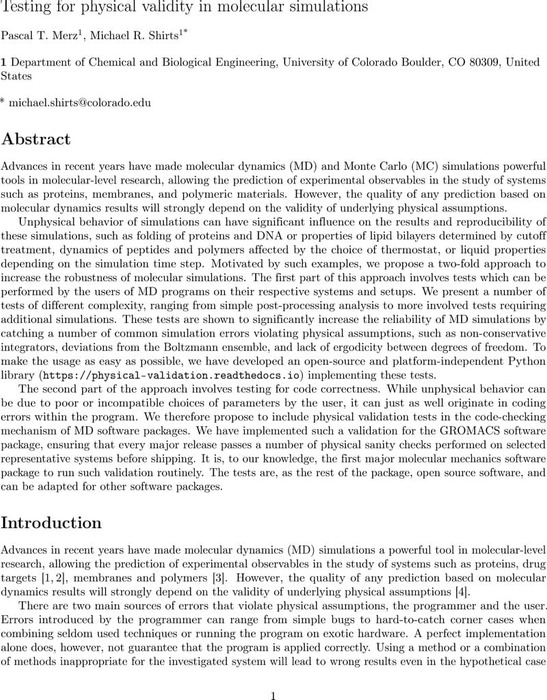 We are encoding your file so that it is compatible across browsers, depending on file size and type this may take some time.
supp