Isonitriles as Stereoelectronic Chameleons: The Donor-Acceptor Dichotomy in Radical Additions

This study started from a simple question of why isonitriles and alkynes (the two functional groups that look so much alike in their ground states) provide drastically different type of products in addition reactions. Whereas addition to alkynes proceeds in a “1,2-addition” where the new bonds are formed at the different alkyne carbons, isonitriles can react via “1,1-insertion” by forming both new bonds at the same terminal carbon of the isonitrile moiety. Such outcome is consistent with the hidden carbene nature of the isonitrile functionality.

Due to the ability of serving as 1,1-synthons, isonitriles lend themselves to a variety of annulations where they serve as a one-carbon component in assembly of carbo- or heterocycles (e.g., [4+1] annulations pioneered by Curran) or, with a change of reactant topology, as two-atom components in the assembly of heterocycles.

Our hypothesis was this behavior should be associated wtih additional state-crossings that corresponds to intramolecular charge and spin-transfer between nitrogen and carbon. Understanding of such dynamic state interconversion may unlock new electronic effects, not available to alkynes. From the practical perspective, such conceptual understanding can lead to the design of more efficient radical cascades.
Indeed, computational analysis of isonitrile's interaction with alkyl, aryl, heteroatom-substituted and heteroatom-centered radicals found a number of intriguing electronic, supramolecular and conformational effects. In general, the evolution of electronic changes in the process of radical addition to isonitriles reveals that this reaction starts and continues all the way to the TS mostly as a simple addition to a polarized pi-bond. Only at the later stages, after the TS has been passed, intramolecular electron transfer from the lone pair of carbon to the nitrogen moves the spin density to the a-carbon to form the imidoyl radical, the hallmark intermediate of the 1,1-addition-mediated cascades.
Computational Details:

Calculations were carried with the Gaussian 09 software package, using the (U)M06-2X DFT functional (with an ultrafine integration grid of 99,590 points) with the 6-311++G(d,p) basis set for all atoms except of Sn and Ge, for which we have used the Def2-QZVPP basis set. Grimme’s D3 version (zero damping)for empirical dispersion was also included. Frequency calculations were conducted for all structures to confirm them as either a minimum or a Transition State (TS). Intrinsic Reaction Coordinates (IRC) were determined for the TS of interest. Barriers were evaluated from isolated species due to formation of complexes for some systems, but not all of them. We performed Natural Bond Orbital (NBO) analysis on key intermediates and transition states. NBO deletions were performed at the UHF/6-311G(d) level of theory unless otherwise noted. Spin density was evaluated from the NBO analysis data. The Gibbs Free energy values are reported at 298 K, unless noted otherwise. We have used GoodVibes by Funes-Ardoiz and Paton to obtain the temperature-corrected Gibbs Free energies for calculating the temperature effects on selectivity in multifunctional substrates. 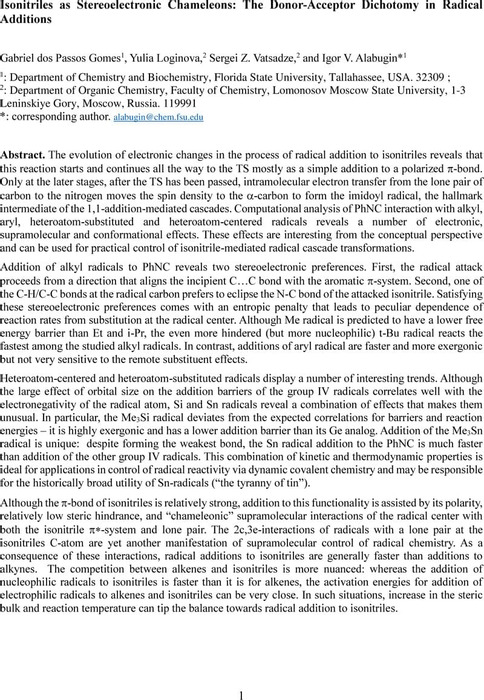