Integrated Synthesis of Nucleotide and Nucleosides Directed by Amino Acids

Research on the origin of nucleic acids and proteins has been approached by either multi-step synthesis or simple one-pot reactions, but exploration of their prebiotic chemistry is normally done separately. However, if nucleotides and amino acids co-existed on early Earth, their mutual interactions and reactivity should be considered in exploring the emergence of complex chemical systems that can ultimately evolve. To explore this idea, we set out to investigate nucleotide/nucleoside formation by a simple dehydration reaction of the constituent building blocks (sugar, phosphate, and nucleobase) in the presence of amino acids (i.e. glycine, arginine, glutamic acid, threonine, methionine, phenylalanine and tryptophan). Herein, we report the first example of simultaneous formation of glycosidic bonds between ribose, purines, and pyrimidines under mild conditions without a catalyst or activated reagents, as well as nucleobase exchange. We observed not only the simultaneous formation of nucleotide and nucleoside isomers from several nucleobases, but also the selection of distribution of glycosylation products when glycine was present. This work shows how reaction networks of nucleotides and amino acids should be considered when exploring the emergence of catalytic networks in the context of molecular evolution. 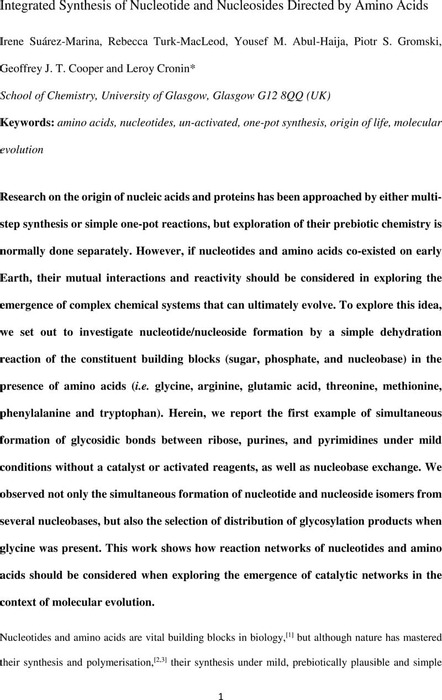 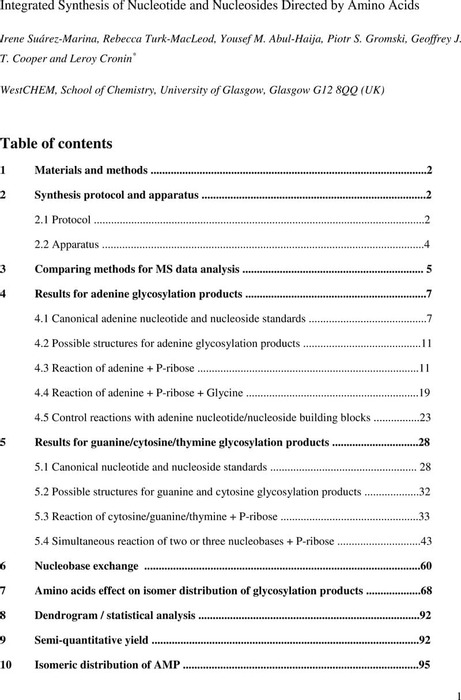 We are encoding your file so that it is compatible across browsers, depending on file size and type this may take some time.
suppinfo