Algorithmic Analysis of Cahn-Ingold-Prelog Rules of Stereochemistry: Proposals for Revised Rules and a Guide for Machine Implementation

The most recent version of the Cahn-Ingold-Prelog rules for the determination of stereodescriptors as described in Nomenclature of Organic Chemistry: IUPAC Recommendations and Preferred Names 2013 (the “Blue Book”) were analyzed by an international team of cheminformatics software developers. Algorithms for machine implementation were designed, tested, and cross-validated. Deficiencies in Sequence Rules 1b and 2 were found, and proposed language for their modification is presented. A concise definition of an additional rule (“Rule 6,” below) is proposed, which succinctly covers several cases only tangentially mentioned in the 2013 recommendations. Each rule is discussed from the perspective of machine implementation. The four resultant implementations are supported by validation suites in 2D and 3D SDF format as well as SMILES. The validation suites include all significant examples in Chapter 9 of the Blue Book, as well as several additional structures that highlight more complex aspects of the rules not addressed or not clearly analyzed in that work. These additional structures support a case for the need for modifications of the Sequence Rules. 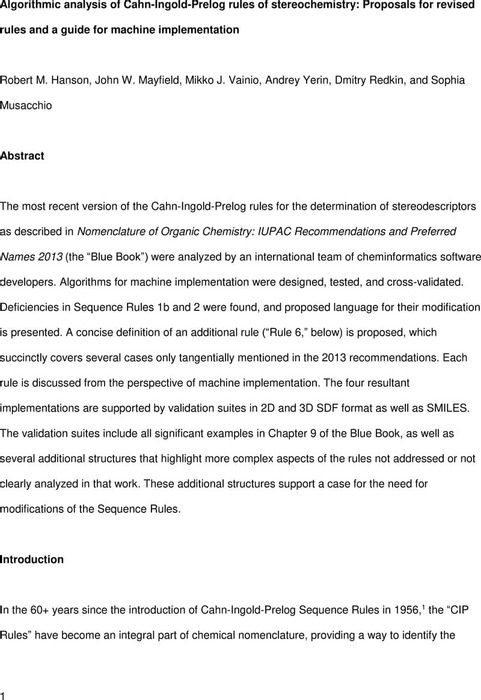 We are encoding your file so that it is compatible across browsers, depending on file size and type this may take some time.
ValidationSuite