This work presents a proof-of-concept study in artificial-intelligence-assisted (AI-assisted) chemistry where a machine-learning-based molecule generator is coupled with density functional theory (DFT) calculations, synthesis, and measurement. Although deep-learning-based molecule generators have shown promise, it is unclear to what extent they can be useful in real-world materials development. To assess the reliability of AI-assisted chemistry, we prepared a platform using the ChemTS molecule generator and a DFT simulator, and attempted to generate novel photo-functional molecules whose lowest excited states lie at desired energetic levels. A ten-day run on 12 cores discovered 86potential photo-functional molecules around target lowest excitation levels, designated as 200, 300, 400, 500, and 600 nm. Among the molecules discovered, six were synthesized and five were confirmed to reproduce DFT predictions in ultraviolet visible absorption measurements. This result shows the potential of AI-assisted chemistry to discover ready-to-synthesize novel molecules with modest computational resources.

The Android robot is reproduced or modified from work created and shared by Google and used
according to terms described in the Creative Commons 3.0 Attribution License. 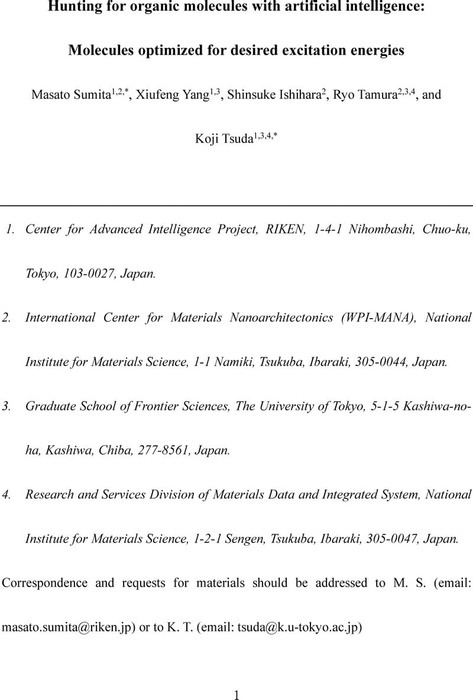 download asset ChemRxiv01.pdf 7 MB [opens in a new tab] cloud_download
pdf : 7 MB
We are encoding your file so that it is compatible across browsers, depending on file size and type this may take some time.