Calorimetric studies of protein-ligand binding often yield thermodynamic data that are difficult to explain in physical terms. Today, explicit solvent molecular dynamics simulations are fast enough that we can begin to use them to look for explanations of such thermodynamic puzzles. Additionally, when such simulations generate results that do not agree well with experiment, this may motivate further development of computational methods and force fields. Here, we apply near-millisecond duration simulations to compute and analyze the binding of four peptidic ligands with the Grb2 SH2 domain, focusing on relative binding enthalpies. The ligands fall into matched pairs, which differ only in the presence or absence of a conformationally constraining bond, which preorganizes two of the ligands for binding. Prior experimental work had revealed, unexpectedly, that binding of the constrained ligands is favored enthalpically, rather than entropically, relative to their flexible
analogs. However, the present calculations yield the opposite trend. On further analysis, the computed relative binding enthalpies are found to be small balances of much larger underlying differences in the mean energies of structural components, such as the ligand and the binding site residues. As a consequence, the deviations from experiment in the relative binding enthalpies represent small differences between these large numbers. We also computed first order estimates of changes in configurational entropy on binding. These suggest that the more rigid constrained ligands reduce the entropy of binding site residues more than their flexible analogs do. The implications of these calculations for the use of simulations to understand the thermodynamics of molecular recognition, and for the computational analysis of binding thermodynamics, are discussed. 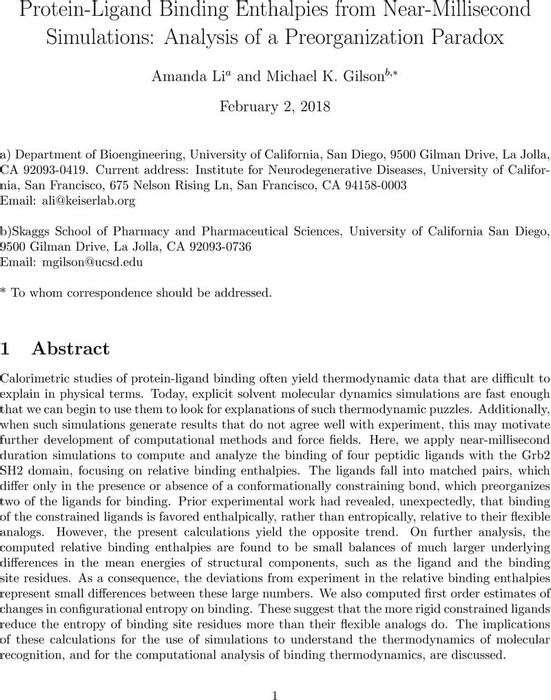 MKG has an equity interest in, and is a cofounder and scientific advisor of, VeraChem LLC.