Using Ubiquitin as an exemplar protein we examine the effect of net charge reduction post electrospray ionisation by exposure to the electron transfer reagent, 1,3-dicyanobenzene. We monitor the change in gas phase conformation of both precursor and products with ion mobility mass spectrometry (IM-MS). Dramatic conformational rearrangement is seen for low charge state ions upon exposure to the electron transfer reagent. Ions with low charge states sprayed from both native-like and denaturing solvent conditions undergo structural transitions to conformers with cross sections in the range measured for the native structure (TWCCSN2®He, 950-1000 Å2). Thus, we infer that some memory of the solution phase structure is retained in the gas phase. Intermediate structures are seen in the reduction of the [M+6H]6+ ion sprayed from both native-like and denaturing solvents. Further, the reduction pathway of this ion shows compaction to structures with a TWCCSN2®He centred at 1069 Å2 (5+) and 949 Å2 (4+) for ions originating from native-like and denaturing solvents respectively. We propose that charge reduction sites for radical anion localisation (to effect electron transfer) are not easily accessible in the case of ubiquitin molecules originating from native-like solution conditions. This highlights the importance of salt bridge interactions in maintaining the structural integrity of a protein in the gas phase. Most interestingly, two distinct conformer populations are seen for the 6+ charge-reduced product originating from the 7+ and, the 6+ exposed to radical anions (post ESI); we infer that these populations are intermediate in the refolding of ubiquitin in the gas phase, sometimes transient. Overall, we are able to monitor the refolding pathway of ubiquitin in the gas phase as its charge is reduced and show that charge-charge interactions play a significant role in the gas phase conformation adopted; whereby specific conformations are formed. 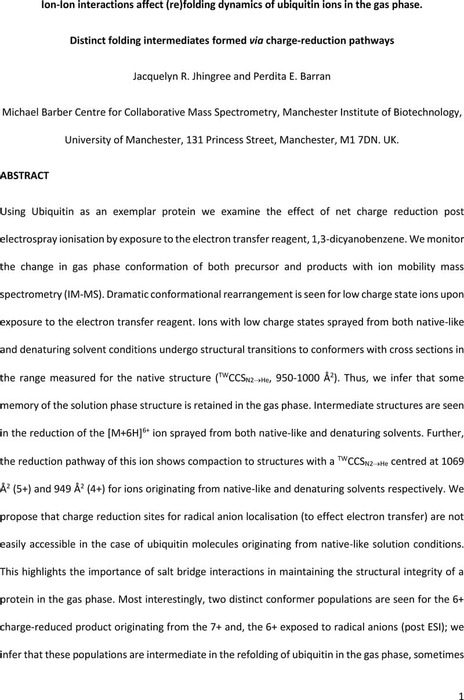 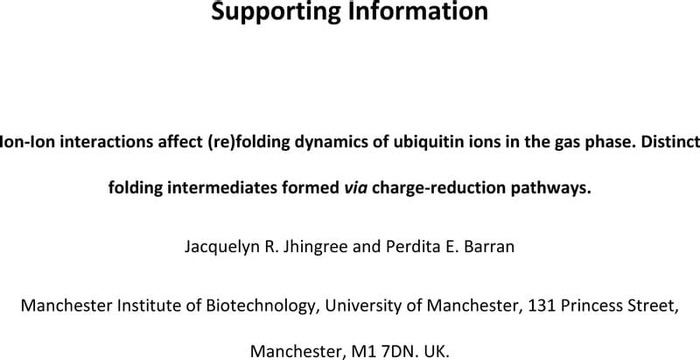 We are encoding your file so that it is compatible across browsers, depending on file size and type this may take some time.
Jhingree Charge reduction Ubiquitin SI 2017

No conflict of Interest