We report on a scheme for estimating intercalant jump-diffusion barriers that are typically obtained from demanding density functional theory-nudged elastic band calculations. The key idea is to relax a chain of states in the field of the electrostatic potential that is averaged over a spherical volume using different finite-size ion models. For magnesium migrating in typical intercalation materials such as transition-metal oxides, we find that the optimal model is a relatively large shell. This data-driven result parallels typical assumptions made in models based on Onsager’s reaction field theory to quantitatively estimating electrostatic solvent effects. Because of its efficiency, our potential of electrostatics-finite ion size (PfEFIS) barrier estimation scheme will enable rapid identification of materials with good ionic mobility. 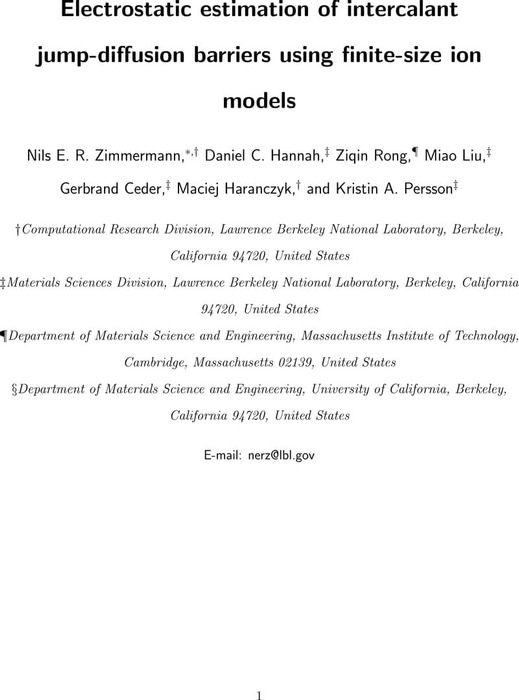 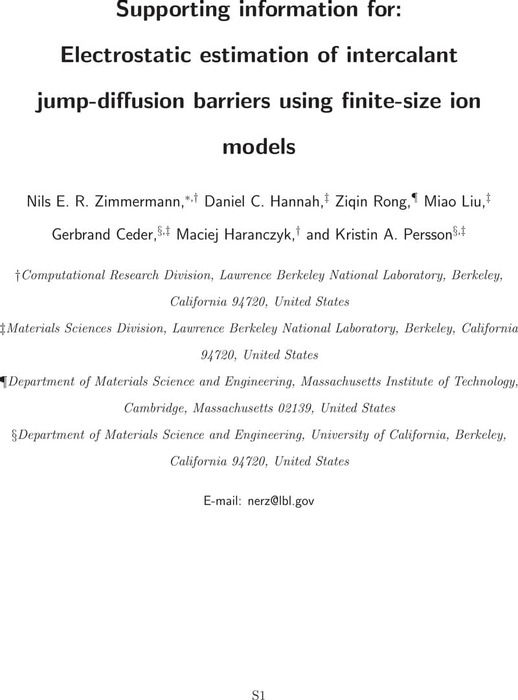 We are encoding your file so that it is compatible across browsers, depending on file size and type this may take some time.
predicting NEB barriers SI 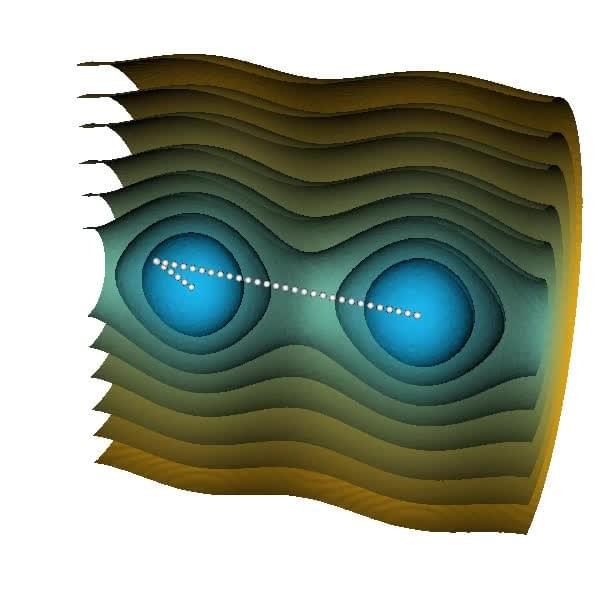 We are encoding your file so that it is compatible across browsers, depending on file size and type this may take some time.
predicting NEB barriers SI movie

This work was intellectually led by the U. S. Department of Energy (DOE) Basic Energy Sci- ences (BES) program—the Materials Project—under Grant No. EDCBEE. We thank Piere- manuele Canepa and Sai Gautam for valuable discussions. Z.R., M.L., and D.H. contributed NEB migration energies as well as local potential calculations and they were supported as part of the Joint Center for Energy Storage Research (JCESR), an Energy Innovation Hub funded by the U. S. Department of Energy, Office of Science, and Basic Energy Sciences, sub- contract 3F-31144. This research used resources of the National Energy Research Scientific Computing Center, which is supported by the Office of Science of the U. S. Department of Energy under Contract No. DEAC02-05CH11231. Furthermore, this research used re- sources of the Argonne Leadership Computing Facility, which is a DOE Office of Science User Facility supported under Contract DE-AC02-06CH11357. Lawrence Berkeley National Laboratory is funded by the DOE under award DE-AC02-05CH11231.