Would It Be Possible to Stabilize Prefusion SARS-COV-2 Spikes with Ligands?

Fusion to host cells and infection caused by Severe Acute Respiratory Syndrome coronavirus (SARS)-CoV2 was inhibited in vitro by PP mutations stabilizing prefusion states of their spike (S) protein native conformation, as reported by several authors. However, the possible stabilization of S by binding-ligands, rather than by mutations, have not been explored, nor it is yet known if it would be possible. In this work, the so called “spring-loaded switch-folding” (SLSF) expanding S amino acid residues 960-1010 was computationally targeted because SLSF surrounded the previously described PP mutations. The SLSF trimeric prefusion conformation consisted in 3x3 α-helices that require a transition to 3 longer α-helices before viral/host membrane fusion, similarly to what occurs in other enveloped viruses. Results of a double computational screening among hundred of thousands of natural compounds for binding to the wild-type isolated SLSF conformer predicted more leads for its trimers than for monomers. Further ranked by the number of SLSF-conformers bound, some of the predicted top-leads may deserve experimental validation. Additional screening among thousands of drugs identified Tinosorb, an star-shaped molecule, as the lowest binding-score lead to SLSF in the low nM range. However, despite its lower binding-score, 3-fold molecular symmetry and fitting the inner part of the SLSF α-helices, we were unable to experimentally show any specific inhibition of S-mediated membrane fusion using an VSV-pseudotyped infectivity assay, nor any virtual binding to S-SLSF using docking to whole native S trimers. Further exploring the star-shaped features may provide new molecular alternatives to cross-bind the α-helices of S-SLSF to hypothetically inhibit coronavirus fusion. 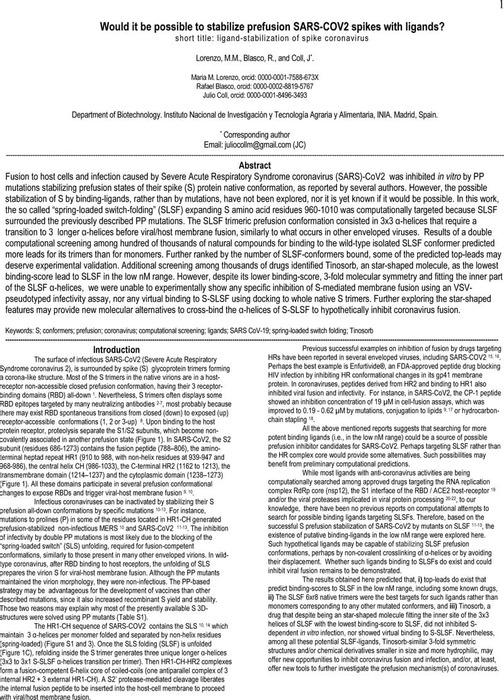 download asset S.vs13.pdf 1 MB [opens in a new tab] cloud_download
pdf : 1 MB
We are encoding your file so that it is compatible across browsers, depending on file size and type this may take some time.

The in vitro experimentation was supported by grant COV20-0901 from Instituto de Salud Carlos III.