Cyanobactins are a family of linear and cyclic peptides produced through the post-translational modification of short precursor peptides. Anacyclamides are macrocyclic cyanobactins with a highly diverse sequence that are common in the genus Anabaena. A mass spectrometry-based screening of potential cyanobactin producers led to the discovery of a new prenylated member of this family of compounds, anacyclamide D8P (1), from Sphaerospermopsis sp. LEGE 00249. The anacyclamide biosynthetic gene cluster (acy) encoding the novel macrocyclic prenylated cyanobactin, was sequenced. Heterologous expression of the acy gene cluster in Escherichia coli established the connection between genomic and mass spectrometric data. Unambiguous establishment of the type and site of prenylation required the full structural elucidation of 1 using Nuclear Magnetic Resonance (NMR), which demonstrated that a forward prenylation occurred on the tyrosine residue. Compound 1 was tested in pharmacologically or ecologically relevant biological assays and revealed moderate antimicrobial activity towards the fouling bacterium Halomonas aquamarina CECT 5000. 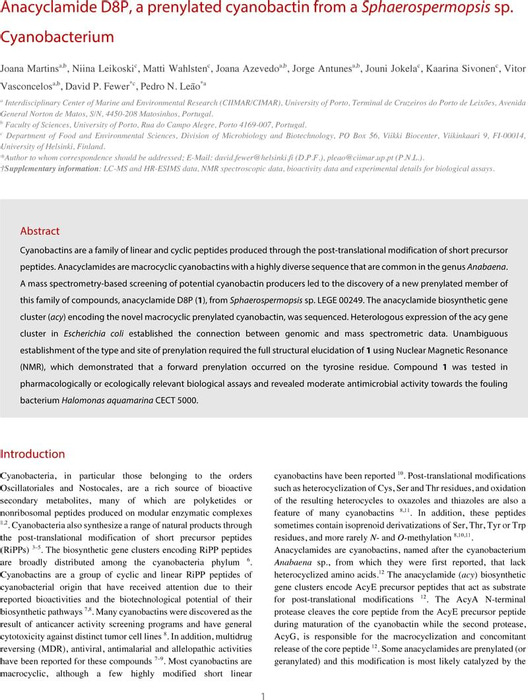 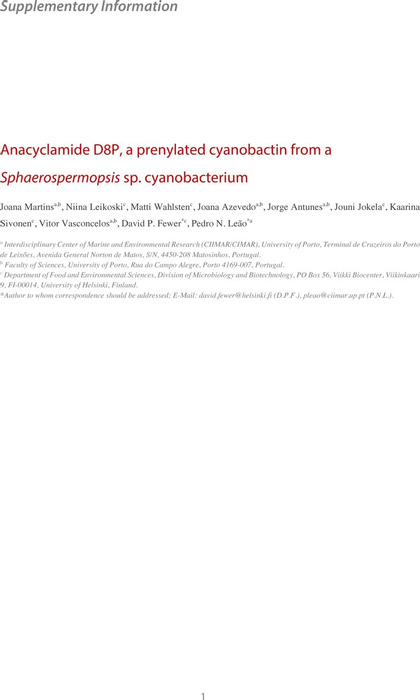 We are encoding your file so that it is compatible across browsers, depending on file size and type this may take some time.
Preprint Martins et al 2017 SI

We declare no conflict of interest.